When asked what he liked most about the Spectacular, Mr. Huang Wencai from Indonesia said, "The performance was very good, wonderful! Everything was very good, fantastic!"

Mr. Tang who came from China and is working in the education system in the USA attended the show with his wife and their child. He said, "The background design was excellent. The first performance ("Descent of the Celestial Kings") and Tang Dynasty Drum performance ("Drummers of the Tang Court") were outstanding. I hope to come next year."

Mrs. Tang said, "We have not seen such a performance since we came to the USA. The costumes and backdrop of the performance were very beautiful."

Physician Mr. Ma Yuan from Pennsylvania said, "We are Chinese, but we are separated from ancient Chinese culture. Now NTDTV's show provided us with some knowledge in this aspect. I'm very happy to learn more about this culture."

Peter moved to the US from Hong Kong many years ago, he said, "We are lucky that there is a singing and dancing troupe of Chinese tradition. It's wonderful!" 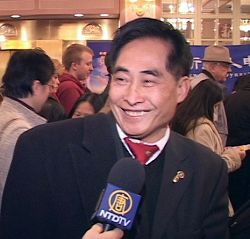 Audience member Peter feels fortunate to have a singing and dancing troupe of Chinese tradition.

Mr. Liao Yuning, a Vietnam Chinese who came to the US thirty years ago, said enthusiastically, "Every performance was wonderful and very meaningful, especially the performance about Falun Gong ('The Power of Awareness'). I feel we should not simply stand by when this is happening. We must step forward to protect these innocent people."

Spreading the word about the show to Chinese friends

Ms. Dai said many of her friends came to attend the show. She tries to bring as many friends as she can each year, because she likes it so much. Although New York City is a bit far for her, she said would also try to attend the show at Radio City Music Hall.

Mr. Liao also said enthusiastically that he had never seen the Chinese New Year Spectacular before, and had wanted to go to New York to see it in past years, but for various reasons, he could not go. This time the Spectacular came to Philadelphia, and he was very pleased to get to attend the show finally. He said he would tell all his friends that the show is excellent.

“Philadelphia Audience Inspired by the Spectacular's Message of Compassion (Photos)”