Divine Performing Arts will perform the Chinese New Year Spectacular in the Swedish Capital of Stockholm and in Linkoping between March 24 and 27, 2008. When the news was released, the Chinese Embassy in Sweden called and threatened the relevant cultural departments last Friday, trying to stop the performances. All major Swedish media exposed this attempt. 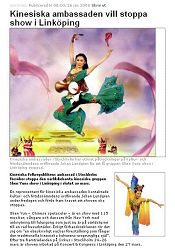 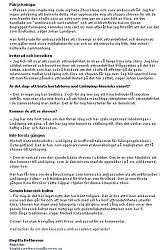 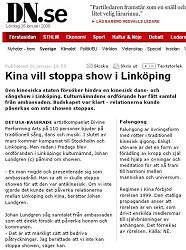 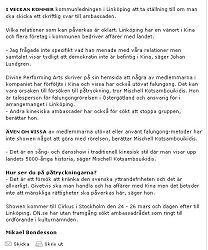 According to the media reports, the Chinese Embassy attempted to stop the Chinese New Year Spectacular from being performed in the city of Linkoping. The official in the Swedish Cultural Department received a phone call from the Chinese Embassy. The message was very clear: if the performance cannot be cancelled, the relationship between Sweden and China will be affected.

Headquartered in the United States, Divine Performing Arts performs traditional Chinese dances, singing, and music. The touring company will come to Stockholm and Linkoping in March. Johan Lundgren, an official in the Linkoping Cultural Department, received a phone call from the Chinese Embassy last Friday. "A person who claimed to be an official in the Chinese Embassy called and asked me to cancel the show. He threatened that if the performance cannot be cancelled, the relationship between China and the city of Linkoping will be affected."

Lundgren said that the caller tried to persuade him and the city administration to cancel the show. "This is obviously trying to exert pressure. I told the caller that we are unable to cancel the performance. I didn't ask what 'the relationship will be affected' means. But the conversation obviously shows that there are no human rights in China."

Michael, a resident of Linkoping, is involved in coordinating the Chinese New Year Spectacular performance in Sweden. He said: "This is an attempt to harm freedom of speech in Sweden. It is extremely serious. People can do trade with China. But it certainly does not mean that human rights in Sweden should be affected."

Divine Performing Arts will perform the Chinese New Year Spectacular shows in over sixty cities around the world, including Stockholm and Linkoping in Sweden. It offers audiences a taste of traditional Chinese culture, adopting a brand new angle to look at the magnificent 5,000-year-old Chinese history. The performance features dances inspired by ancient Chinese mythology, as well as Chinese ethnic folk dances. The show includes Chinese vocal performance, instrumental music and classical Chinese dance. Divine Performing Arts unfolds to the audiences a pure, sincere and kind world. The combination of the beautifully designed scenes, music and dance delivers the essence of traditional Chinese culture.

“Ms. Zhao from Shanghai: "I Liked the Songs About Truthfulness-Compassion-Forbearance the Most" (Photo)”