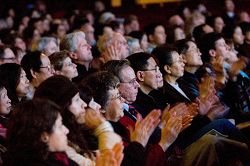 The audience of Chinese New Year Spectacular in San Francisco

Financial officer Dorothy Coftellot and her daughter Sharline attended the show together and complimented the show as being "wonderful, spectacular, phenomenal and inspiring." 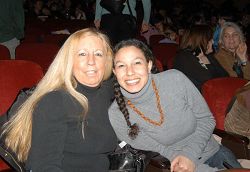 Financial officer Dorothy Coftellot and her daughter Sharline from Berkeley

Dorothy Coftellot said, "I liked everything in the show, including the costumes, drums, backdrops and dance performers."

Her daughter Sharline added that the backdrops were really marvelous, making the stage vivid and lifelike.

Talking about the dances, Sharline was so excited that she kept saying, "I love it! I love it!"

Sharline said that the costumes were gorgeous, the dancers were so graceful, and the dance routines were beautiful. She said would definitely try to learn those dance movements in front of a mirror when she returned home.