The curtain fell on the third show of the Chinese New Year Spectacular sponsored by NTDTV at the Theatre Maisonneuve in Montreal on January 16, 2008. Many among the audience had high praise for the performance. 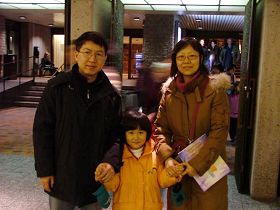 Ms. Li and her family said they would watch the Spectacular again if they are in Montreal next year. 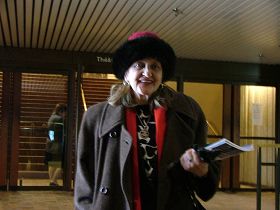 Ms. Wang, who immigrated to Canada twenty years ago, said in excitement, "I liked the drum dance! I would like to watch it again! It is so exciting!" She added, "The backdrops are beautiful!"

Chinese-Canadian Mr. Lin, who has lived in Canada for twenty-eight years, grew up in Vietnam. He liked the drum dances too. He said, "When I was in Vietnam, the Vietnamese government didn't allow learning Chinese culture. I learned a lot [about Chinese culture] from this show. My ancestors are all Chinese."

Ms. Li, a scientific researcher who has lived in Canada for four years, brought her husband and daughter to the show. She said, "I am very impressed with the Erhu playing... and all the dances are great!" She and her family said that they would like to see the Spectacular again if they are in Montreal next year.

Ms. Yuan Ye, originally from China, said, "I liked all the performances. I used to think negatively of Falun Gong when I was in China [due to the Chinese Communist Party's negative propaganda], but after watching the show, I think that Falun Gong really spreads Truthfulness, Compassion and Forbearance. We shouldn't reject them. I felt very sad watching the piece about the persecution of Falun Gong. People dare not to step out in China."

Elisabeth Fabian is a freelance reporter for several newspapers that address the needs of European immigrants. It was the second time she watched the show. She said it was truly spectacular, especially the live orchestra. She felt all the more from watching the show that all people should live together peacefully. Elisabeth said, "The whole show... I can't find words to describe it. Super! Super!"