Latvia: Practitioners Hold a Rally to Call for an End to the CCP's Atrocities (Photos)

(Clearwisdom.net) On April 21, 2006, Falun Gong practitioners and their supporters held a rally in the centre of Riga,the capital of Latvia after a 72-hour hunger strike. The rally was entitled "Indifference will Turn Us into Accomplices of Criminals." The rally protested the CCP' atrocities of having removed organs from live Falun Gong practitioners and called upon the international community to make immediate investigations into all forced labor camps in China. 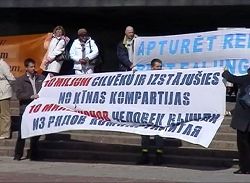 The scene of the rally

In the city centre, those who participated in the rally raised banners reading "STOP! Stop the CCP's genocide! Stop all forced labor camps and hospitals from removing organs from live Falun Gong practitioners" "Stop the CCP from persecuting Falun Gong!" and "10,000,000 people have quit the CCP." Those attending the rally stated that the international community made the promise "Never Again" after World War II, but now a similar thing is happening in China. Therefore, we can't let indifference turn us into accomplices of the criminals. 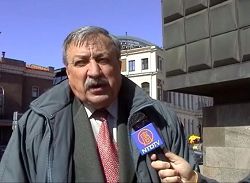 Ivars Maurins, Duma lawyer of Riga said that respecting human rights is the principle for everybody to abide by. He said the European Alliance, including Latvia, can do a lot of things to make more people realize the present problem in China. The rally held today is very good, the more the better. 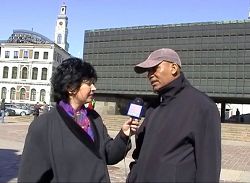 A Dutch citizen learns the truth

After hearing of the incident of organ harvesting in China, a Dutch citizen working in a medical company in Riga was shocked. He said: "It is too terrifying to imagine. I believe, such a protest is helpful to stop those horrible things happening right now in China."

The rally went on for four hours.