"Earth Day," an annual event in St. Louis, took place again in Forest Park. Falun Gong practitioners participated in the event as in past years. They set up tables to clarify the truth of Falun Gong, but, different from previous years, the focus was on the Chinese Communist Party's organ harvesting atrocities that were exposed just last month. These horrors angered many of the Earth Day participants and many signed their names on the petition form calling for a thorough investigation of the CCP's forced labor camps and prisons. 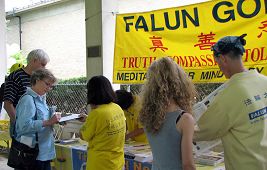 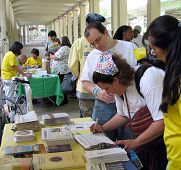 People sign their names on the petition form calling for a thorough investigation of the CCP's forced labor camps and prisons.

From the incident on the South Lawn of the White House a few days ago, many people first heard the words "Falun Gong" in the major media. They had already learned the truth on TV so they immediately signed their names when they saw Falun Gong's table. They also expressed their support for Dr. Wang Wenyi, who spoke out at the White House for an end to the persecution.

District Congressman Carnahan also set up a booth at the Earth Day festivities. The practitioners gave him the most recent updates on the CCP's organ harvesting atrocity and the two witnesses who spoke to the public on April 20. The congressman thanked them for the information and expressed his concern on the issue.

The "Earth Day" activities lasted until the evening. All of the truth clarification materials were passed out. The signed petition forms will be mailed to President Bush, congressmen, and related government offices.

“Latvia: Practitioners Hold a Rally to Call for an End to the CCP's Atrocities (Photos)”