(Clearwisdom.net) On July 20 2009, Falun Gong practitioners of Calgary Canada rallied in front of the city hall during the day and held a candlelight vigil in front of Chinese Consulate in Calgary in the night, calling for the world to help stop CCP's human rights violations and to commemorate fellow practitioners who died in the persecution.

Around noon on July 20, Falun Gong practitioners of Calgary rallied in front of the city hall. A large banner reading "Persecution of Falun Gong Won't Stop Until CCP Disintegrates," and dozens of display boards were set up to introduce Falun Dafa, clarify the truth and expose the evil nature of CCP as stated in Nine Commentaries on the Communist Party. Passersby stopped to read the boards and signed their names to condemn the persecution after learning the truth. 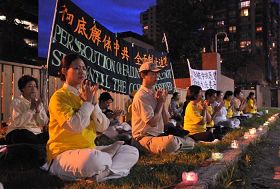 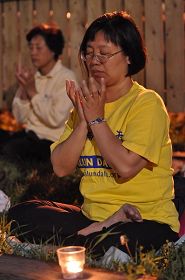 Ms. Sun, a representative from the local Falun Dafa Association stated that Chinese Communist Party (CCP) is the origin of the disasters. The only way to end the persecution and save the China is to peacefully disintegrate CCP. 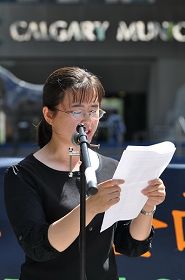 She said, "since July 1999, the CCP utilized all the national mechanism in a systematic persecution against Falun Gong practitioners to "defaming their reputation, bankrupting them financially, destroying them physically", as well as over hundred torture methods.

"In ten years, Falun Gong practitioners endured the hardship and persistently clarified to truth to the world, exposing how cruel the persecution is.

Doctoral Student from Tsinghua: Three years in Jail Could Not Change My Belief

Winston Liu was studying in Tsinghua University when the persecution of Falun Gong started. He appealed to the government and tried to clarify truth to people he met. From 1999 to 2001, he was detained four times and was sent to brain-washing class. In 2001, he was sentenced to prison for three years. He was released in 2003 and later escaped the persecution and moved to Canada in 2005. Now he is a doctoral student in Calgary. But his wife Yao Yue, who was sentenced to jail at the same time, is still being jailed in Beijing Women's Forced Labor Institute. 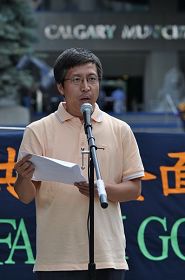 Winston Liu: three-year-jail could not change my belief

Winston talked about his personal experiences since the persecution stated ten years ago. Since that special day, July 20 1999, he changed from a doctoral student of Tsinghwa University to a frequent detainee. In 2001, he and his wife both were charged to prison for three years.

According to Liu, the mental torture in the jail was much harder than the physical tortures. Though he was often beaten up or electric shocked by the prison ward, but the mental torture almost destroyed him. Once for six months, he was locked in a small cell separated from others. The prison ward told him if he didn't give up practicing Falun Gong, they would torture him until he mentally collapsed. Since then he was forced to continuous brain-washing, deprivation of sleep, forced to inject unknown medicines to destroy his nerve system and frequently collected blood to do unknown tests. At the time he was released, his hair all turned while and he was at the edge of collapse.

Ms. Huang: Effectively work together to stop the persecution. 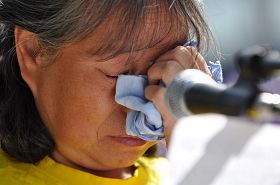 Ms. Huang Jinling was in tears when talked about the tortures and suppressions Falun Gong practitioners endure.

Ms. Huang started to practice Falun Gong in 1998. Shortly, all her diseases were gone. Physical benefit and moral level raising, she became a bright, happy and energetic woman. When her family and friends eye-witnessed the magic effectiveness of Falun Dafa, they all praised Falun Dafa is great.

Since 1999, CCP started the persecution of Falun Gong. Huang appealed to the government that Falun Dafa is good and resulted in being jailed in a forced labor camp where she was forced to work long hours, beaten up, deprived sleep and deprived the right to use toilet. Later, once a healthy woman became so sick that she could hardly walk. She also suffered from a strong heart attack and was sent to hospital. Her daughter was also jailed for practicing Falun Gong and brutally force-fed. Even after they were released, the local policemen frequently harassed them and kept surveillance on them. Their family members who do not practice Falun Gong were also abducted, threatened and dismissed from jobs when the employer was threatened.

Mr. Tang, the Chairman of Democracy Promotion Association of Calgary, spoke at the rally. He said that even though he doesn't practice Falun Gong, he upholds democracy, freedom and human rights and against torture and killing of innocent people. "The Chinese Communist Party's nature is killing and creating suffer. They never truly care of the people's life. For example, just look at the Tiananmen massacre and the recently killings in Tibet and Xinjiang" 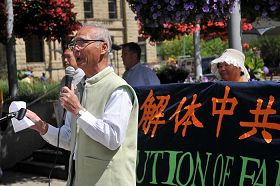 Mr. Tang, chairman of Democracy Promotion Association of Calgary: Can you hope CCP to change its nature of killing? No!

After the lunchtime rally at City Hall, a candlelight vigil followed in the evening in front of the Chinese Consulate.