On July 20, Falun Gong practitioners from Montreal, Canada, held a rally and candlelight vigil in Zhongshan Park, Chinatown, calling for an end to the persecution. 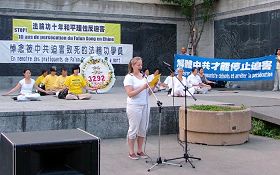 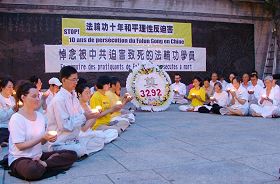 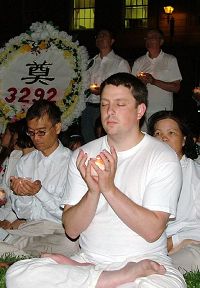 The rally started at 6:30 p.m. The host briefly reviewed the history and facts of the persecution and how practitioners peacefully resist it.

Ms. Cheng Guizhi, who just came to Montreal from China, told her own experience of being tortured in China. She was sent to a forced labor camp twice for practicing Falun Gong. She was badly tortured and forced to do hard labor.

A new practitioner, Mark, said that practicing Falun Gong has helped him. He found the persecution in China unacceptable and he hopes that he can help to end it.

Many people were attracted to the rally and some of them joined the practitioners. An older Chinese couple watched the rally. The husband said, "The reason for the persecution is not because Falun Gong is harmful, but because the Communist Party does not allow the existence of a large group in China." The wife expressed her hope that the Party be peacefully dissolved so that the persecution would end.

A gentleman from Taiwan said, "I can tell that practitioners are nice people. I will tell more people about their peaceful resistance."

Many Westerners also expressed their intent to do what they could to stop the persecution.

After the rally, practitioners and supporters held a candlelight vigil in front of the city hall, in memory of those who were tortured to death during the persecution. They formed the word "Justice" using candles, calling upon kind people to help stop the persecution.