On July 18, Falun Gong practitioners from Taitung held a candlelight vigil at Chiben River, a famous tourist spot, to bring the persecution of Falun Gong to people's attention. Mr. Liang, a practitioner, said that many Chinese tourists visited the site, so he hoped that they would learn the facts about Falun Gong. 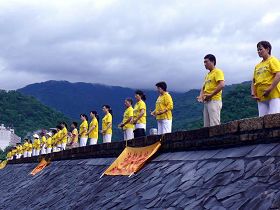 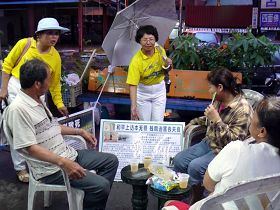 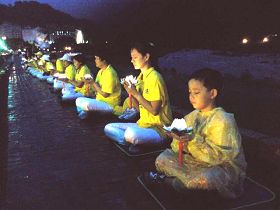 The practitioners' group exercises drew the attention of many spectators. Some of them asked where they could learn the exercises. Many tourists accepted truth-clarifying materials. One of them said that he knew about the persecution but that he did not know it was so brutal. Another tourist noticed that there were a lot of Chinese tourists, and she hoped they would learn the truth, too.

After the exercises, practitioners held a candlelight vigil in the rain. Many buses full of tourists from Mainland China came to the site, and all of them saw the vigil.

Mr. Jiang, another practitioner, said that the persecution actually involves the whole world: " For there to be peace in the world and an end to the persecution, the Communist Party must be dissolved. More than 57 million Chinese have quit the Party. We hope more people will recognize the evil nature of the Party and help to stop the persecution."

“Napoli, Italy: Chinese Tourists Recognize that Falun Dafa Has Spread Around the World”