Macao: Practitioners Make Public the Facts of the Persecution on July 20 (Photos)

On the afternoon of July 20, 2009, which marked the tenth year of Falun Gong practitioners' efforts to end the persecution, practitioners in Macao held activities in front of Rose Hall on a busy pedestrian street. Tourists and residents in Macao viewed photos and displays that exposed the persecution by the Chinese Communist Party (CCP), as practitioners distributed truth-clarifying materials, explained the facts about the situation to tourists from China, and exhorted them to quit the CCP and its affiliated organizations. 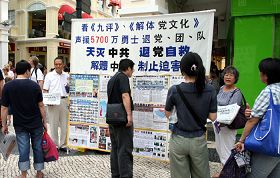 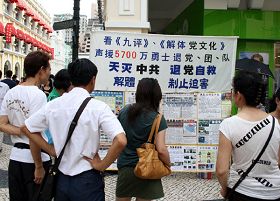 Since it is summer vacation, there were many tourists from China, particularly young people, in Macao sightseeing and shopping. At 2:30 p.m., as soon as practitioners held up their display boards, a teenager walked up to get some materials. He said, "Actually, we all know and privately discuss how bad the CCP is, but what can we do?" A practitioner said to him, "It's not true that there is nothing we can do. If everyone reads the Nine Commentaries on the Communist Party, sees clearly the true nature of the CCP, and refuses to collaborate with it to do bad deeds, the CCP will have no way to perpetuate itself." The practitioner then explained to him the significance of the "three withdrawals" (withdrawing from the CCP and its two youth organizations). The young man nodded and announced his withdraw from the Youth League then and there. He also said that he would spread the news about the three withdrawals among his friends.

For the Chinese tourists that could not understand the truth immediately, the practitioners handed out truth clarification materials and asked them to read them after returning home. Then they wished them a wonderful future.

During the three-hour-long activity, the practitioners helped over 40 Chinese people to do the three withdrawals and distributed a large number of truth-clarification materials. The materials they had prepared, including newspaper, discs, and copies of the Nine Commentaries, were almost all given out.

Practitioners said that the ten years of persecution has not only brought huge tribulations to Falun Gong practitioners and their families, but also dragged the entire Chinese nation to the abyss. Through their truth-clarification efforts, practitioners are trying to help people break away from CCP control and obtain a wonderful future for themselves. Only with the disintegration of the CCP will the persecution truly end.

“Kyushu, Japan: Practitioners Hold a Peaceful Protest against the Persecution in Front of the Chinese Consulate in Fukuoka (Photo)”