Kyushu, Japan: Practitioners Hold a Peaceful Protest against the Persecution in Front of the Chinese Consulate in Fukuoka (Photo) 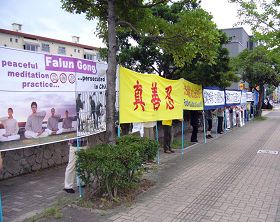 On July 20, 2009, practitioners held a peaceful protest against the CCP's decade-long persecution in front of the Chinese Consulate in Fukuoka

Since July 20, 1999, headed by former dictator Jiang, the CCP launched a large-scale persecution campaign against Falun Gong in China. As of today, 3297 practitioners are confirmed to have been killed in the persecution, tens of thousands of practitioners have been arrested, detained, beaten, some of them have been incarcerated in forced labor camps or prisons. On top of that, many practitioners were subjected to gross mistreatment and abuses and even had their organs taken while they were still alive.

Falun Gong practitioners protested the persecution in their own ways. Some practitioners silently held banners, standing in front of the consulate, and some sat on steps silently sending righteous thoughts. The peaceful and compassionate atmosphere drew attention from passersby.

Practitioners sincerely hope that those who have not learned the true situation can recognize the CCP's evil nature, see through its deceptive lies, and realize the historical necessity that "Heaven will eliminate the CCP." Making the three withdrawals from the Party will facilitate this necessary change and ensure a good future to those who firmly opposed its crimes against humanity.

Falun Gong, also known as Falun Dafa, is a traditional Chinese spiritual discipline for mind and body. The practice involves slow, gentle movements and meditation. It is easy to learn, enjoyable to practice, and free of charge. Its principles are based on Truthfulness-Compassion-Forbearance. The practice began in China in 1992 and quickly spread by word of mouth throughout China and then beyond. Its beneficial effects in uplifting an individual's physical, mental, and spiritual health, not to mention its positive influence in the community and society as a whole, have been undeniable. In fact, Falun Gong is practiced by over 100 million people over 110 countries. The main works of Falun Gong are available in over 30 languages.

“Germany: Commemorative Activities Calling for an End to the Ten-Year Persecution Held in Essen City (Photos)”

“Macao: Practitioners Make Public the Facts of the Persecution on July 20 (Photos)”