On the afternoon of March 7, more than 2,000 people from all over Taiwan rallied outside the presidential mansion in Taipei to support the 50 million courageous Chinese people who have declared their withdrawals from the Chinese Communist Party (CCP) and its affiliated organizations. 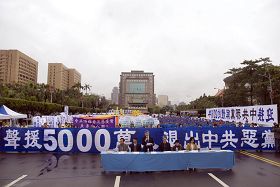 More than 2,000 people rallied outside the presidential mansion 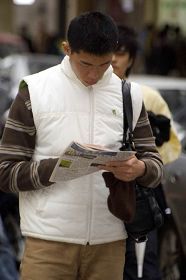 A passerby reading a truth-clarification flier 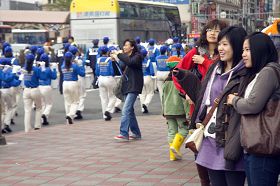 The Divine Land Marching Band attracted the attention of many passersby 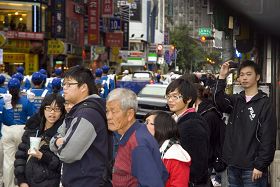 CCP Is Desperate and the Hope for Chinese People Shines Bright

At the rally, Ching-His Chang, the chairperson for the Taiwanese Falun Dafa Association, gave a speech. He said, "In the 60 years of CCP tyranny, without any major war, tens of millions of innocent Chinese people died unnaturally. The communist regime is the most evil regime in human history and the CCP is soon to be destroyed by heaven. While its fate is doomed, anyone associated with this evil party will be implicated. Therefore, we urge Chinese people to quit the CCP and its affiliated organizations. Facing the movement of quitting the evil party, the CCP is desperate and the hope for Chinese people is shining bright."

Chu-chung Ming is a politics professor at Taiwan University. At the rally, he said, "In the face of the CCP's atrocities, the majority yielded and kowtowed to the evil party. However, 50 million Chinese people have had the courage to say "No!" to the tyranny. They need our support and they deserve our praise and admiration. The CCP killed people in the past, it is killing people now, and it will continue to kill in the future. One of the goals of this rally is to disclose its atrocities and let everyone know that the nature of the CCP has never changed."

Activist Pan Qing who now lives in Australia also attended the rally. He said that the CCP is a cancer attached to China and its existence is a big threat to fundamental human rights. He hoped that the Taiwanese people will continue to support Falun Gong practitioners who are persecuted by the CCP, as well as Chinese activists for human rights and democracy.

A Chinese tourist took photos of a banner which read "Support 50 Million People Who Have Quit the Chinese Communist Party." He asked whether these kinds of events are only being held in Taiwan. When he was told that this is a global effort, he said, "This event should be held in Beijing as well. "

Retired teacher Mr. Chen just came back from the US, where he had seen a Quitting the CCP parade in California. He is a reader of the Epoch Times newspaper and thus knew the Nine Commentaries on the Communist Party well. He commented that the power of people can change anything when people all step forward together.

Mr. Cheng has been fed up with bad news from China: suppression of Tibetans, tainted food, the persecution of Falun Gong, etc. He said that the CCP had been trying everything possible to disguise itself and make people believe that it has changed. However, its evil nature has never changed and its fate is doomed.

Mr. Mao is an engineer consultant who often visits China. When he was handed materials with information about Quitting the CCP, he said that such information was very important to him and he would find time to read the Nine Commentaries. Mr. Hsu, an engineer, said that Taiwanese people need to know the real situation in China, and added that the parade serves this noble purpose.

Mr. Liu just married a Mainland Chinese woman. He said that his wife was a member of the Communist Youth League. He wrote down the fax and phone numbers for the Global Quitting the CCP Service Center and said that he would tell his wife to quit the Youth League through the center.

As of March 7, 2009, 50,829,158 Chinese people have quit the CCP and its affiliated organizations. According to published data analysis, it took 17 months for the tally to reach 10 million, however, it only took 7 months for the tally to grow from 40 million to 50 million. Ms. Xia is a volunteer for the Global Quitting the CCP Service Center. She said, "We have been calling China regularly, and some Mainlanders also called us. Once they heard our message, many of them decided to quit the CCP right away. We now help at least 50,000 Chinese people quit the evil party every day."

“Epoch Times: Communication Manager is Stunned by 'Wide range of the performances' (Photo)”