(Clearwisdom.net) It rained heavily on the morning of March 6 in Taichung, but that did not dampen the enthusiasm of the audience that came to watch the show by Divine Performing Arts (DPA) International Company in Hui-Sun Auditorium at National Chung Hsing University.

Well-known ceramic artist Tseng Ming-nan has a master's degree from Wolverhampton University in the United Kingdom. He serves as the director of the Taiwan Association for Artistic Advancement and the Taiwan Ceramic Art Association. He said after watching the show, "Very moving. The programs made me feel as if I was one of the performers on stage." 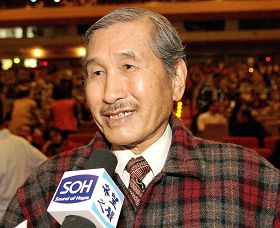 Mr. Tseng was impressed by the Buddha images in the show. He said that general art shows are either too serious or too casual, but the DPA show presents the essence of Buddha's compassionate teachings and touches the audience with non-verbal means. He said, "The DPA dancers have touching aesthetics when they raise their hands or simply walk. The program presents solemn Buddha images and touches the audience via costumes, dancing and body language."

Mr. Cheng Min-hsian, Associate Professor in Art Education at the Institute of Changhua Normal University, works on aesthetic education year-round and participates in studying and designing aesthetic coursework. After watching the show, he said that the DPA presented the essence of Chinese culture. 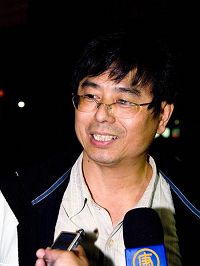 He said, "The first half of the show includes many traditional arts, including different artistic cultures of different times. There are programs from historical stories and literature. The program showing the persecution of Falun Gong (Heaven Awaits Us Despite Persecution) presents current issues from China. It's worth thinking about for every Chinese person."

Mr. Cheng was impressed with the backdrops, as well. He said, "It is suitable for young people, those people with life experience, and others as well... Today, the combination of dancing and opera is promoted in high schools and primary schools. This is letting the students watch not only dancing, but thinking overall about costumes, opera, and cultural background. The show really presents a comprehensive view of art."

"The DPA is indeed great," said Mr. Tsai Ching-Chang, Director-General of the Taichung City Art Education Society, who is a retired university lecturer on fine art. After seeing the DPA show in Taichung on March 6, he commented, "It is amazing that the show can be presented on so many days, attracting so many people to each show." 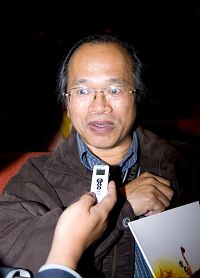 Amazed by the magnificence of the DPA show, Mr. Tsai said, "It is indeed remarkable that the show is so wonderfully performed, and is so popular internationally. It is a source of pride for all Chinese people."

Fascinated by the DPA's exquisite performance, he said, "I feel the costumes were wonderful. The application of multimedia technology and the animation effect to enhance the backdrop was perfect. We could tell the kind of thought that went into it, and the audience felt very surprised and touched."

After seeing the DPA show, he used the word "great" to describe his feelings. "It is great that the DPA show presented the 5,000 years of Chinese culture so well. The performance, the effect of the backdrops, the movements of dancers and their dancing skills were very high-class. The overall artistic effect and the colors were very refreshing, harmonious and pleasant."

"I know Falun Gong has been persecuted by the Chinese Communist regime due to its belief, but what is presented on the stage is not the sorrow over the persecution, instead, performers are full of glory and confidence."

"Judging from the perspective of artistic forms, this is really great, and it's not easy to come by. It makes the audience feel like sharing the pride. Whether you are a performer or an audience member, it is an honor to attend the show, so I say it is something great," he explained.

"I was very touched by the show. I think such a touching performance would definitely be liked by the audience." He added that he will recommend the show to more people he knows, saying, "In fact, today's performance would be a good subject for teaching my students. I will share what I saw and what I was touched by today with my friends and students."

Mr. Tsai has long been engaged in fine art education. He is the Director-General of the Taichung City Art Education Society and the President of the Niumatou Painting Association. He used to teach at the Huwei Institute of Technology in Yunlin County, and he recently retired from Ling Tung University in Taichung.