(Clearwisdom.net) Kaohsiung, TAIWAN- The Shen Yun Divine Performing Arts' (DPA) performance on March 15 was a moving experience for the audience in Kaohsiung, Taiwan.

President of a Painters' Association: Invincible Power of Truth-Compassion-Forbearance

Ms. Yang Yuxian, President of the Wujinyaji Painters' Association in Taitung County, said that the pressure she felt from daily life was gone after the two and a half hour show. 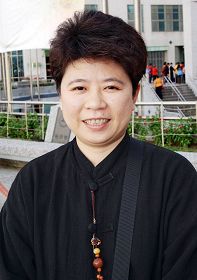 "I see the beauty of Chinese traditions, the spirit of the artists and the value of Truth-Compassion-Forbearance being passed down. I felt a sense of peace after the experience."

Ms. Yang believes that in this chaotic society, the Spectacular can awaken the kindness hidden inside people. "In this society, people don't do what they are supposed to do; there are always fights in politics and people defraud others to get what they want. The songs sung by the vocalists can wake up the kindness hidden deep inside people, the true self that we've forgotten."

Ms. Yang said that Truth-Compassion-Forbearance is a power that can make the world a better place.

Professor Isaiah C. Lee is a world-renowned scholar who specializes in social science and health care for the elderly. He founded the Department of Social Work for the California State University at Long Beach, and is a tenured professor. He is now a visiting professor at the Department of Recreation Management at Shih Chien University. Dr. Lee's remarks after seeing the show were very positive, "The visual effects of the backdrop presented Chinese traditions in a very charming fashion. Everything matches in a harmonious way." 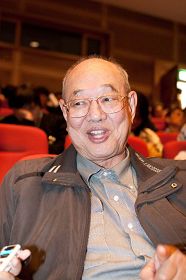 Dr. Lee especially liked the dancing and colors in The Mystical Phoenix: "The backdrop, the costumes, the choreography and the postures of the artists were exquisite." He commented that watching the Spectacular, one needed more than just ears and eyes but also the heart to understand the meaning behind the stories. "This was what made Shen Yun unique."

Dr. Lee was moved by the story in Heaven Awaits Us Despite Persecution. He started thinking about what was going to happen after the male character died because of the Chinese Communist Party's persecution of Falun Gong. Dr. Lee naturally believed the character's family would be in enormous pain and anger and want revenge. "But they did not. This program helped me understand the spirit of Falun Gong's Truth, Compassion and Forbearance, especially Forbearance."

"Falun Gong practitioners are holding on to their beliefs after so many years of persecution. Their faith leads them to God. The ending is bright and beautiful."

Dr. Lee praised Shen Yun for promoting orthodox Chinese culture and the positive influence it brings to the society.

Musical composer Hsu Ming-De was happy to see the pure Chinese traditions from the show. "I felt the show is based on genuine Chinese traditions, including the music and the dances. It's a powerful tool in promoting Chinese culture." 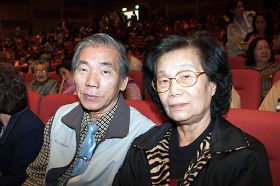 Mr. Hsu was very impressed with the ethnic dances while his wife couldn't stop praising alto Yang Jiansheng's voice, "Her voice was very good, and the tone was deep and rich. It's a very charming voice."

Mr. Hsu has been a part of music education for over 40 years and teaches music in Pingtung County. He has published many books to teach people about music. The head of Pingtun County, Tsao Chi-Hong, calls him "king of ballads in Pingtung" and the former director of the Pingtung Culture Center, Tsai Tung-Yuan, calls him "national treasure of Taiwan music."

Hong Hui-Chao, President of the Kaohsiung City Dance Teachers' Association, came to see the show for the second time because "the colors, costumes, make-up, backdrop, and postures all blend into beauty." She found the movements of the artists to be synchronized and commented on how they all had smiles on their faces, "It's so comforting to watch them." 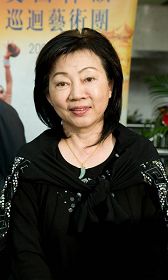 Ms. Hong said that the subjects this year were creative and came from China's long history. "Shen Yun clearly put in a lot of effort. The choreography, the dances and the animation on the backdrop all matched very well. The audience could relate to what was happening on the stage. It was so relaxing."

Ms. Hong was amazed when she heard alto Yang Jiansheng's singing Pause to Notice. She said that it was rare to hear someone with such a naturally perfect and rich voice, and that it was wonderful to hear her sing.