(Clearwisdom.net) On August 16, Falun Gong practitioners from New Zealand held truth-clarifying activities in across New Zealand in the cities of Auckland, Hamilton, Wellington and Christchurch. 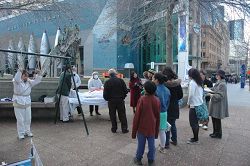