(Clearwisdom.net) Sunday, August 17, local Falun Gong practitioners went to clarify the truth in the local Chinatown of Honolulu, the capital of Hawaii. The activity focused on exposing how the Chinese Communist Party has used the Olympics as an excuse to escalate the suppression of Falun Gong. The practitioners passed out fliers and also set up a banner stating "Chinese Communist Party's persecution of Falun Gong Violates the Olympic Spirit". The banner attracted many passersby. 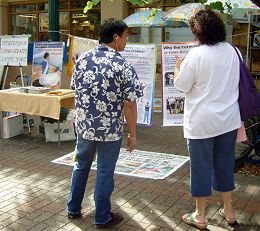 A practitioner talks to a passerby

Thousands of practitioners were jailed illegally, while many were tortured and some died in custody. This, all in the run up to the Beijing Olympics. Meanwhile, practitioners detained in Beijing were moved out, while others who have been "transformed" were brought in to replace them. Why? So that any foreign reporters who showed up during the Olympics would only hear the Party line, mindlessly parroted by those who have been brainwashed, rather than the actual voices of Falun Gong detainees.

Many passersby in Honolulu expressed their disdain. A western couple talked to a practitioner for a long time and learned the truth in depth. They were shocked to learn about the organ harvesting atrocities. Many Chinese people encouraged the practitioners to continue their efforts.