Oil Painter: The Performance Is Magnificent and More Than Perfect (Photo)

The second performance of the Chinese Spectacular by the Divine Performing Arts of New York (DPA) in Melbourne, Australia, the afternoon of March 29, 2008, impressed an enthusiastic audience that included many artists.

The Performance Was Unexpectedly Perfect

Ms. Nancy Thurlby, an oil-on-canvas painter, had her own professional studio in the Glen Iris district in the heart of Melbourne. She saw the performance with her husband and thought it was "grand, magnificent, and unexpectedly beautiful and perfect." She was most impressed by how bright and stately the costumes were and how the classical dance and music were combined so perfectly. 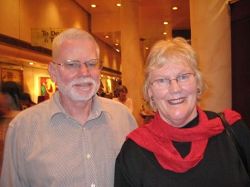 Painter Nancy Thurlby and her husband.

When she saw "The Risen Lotus Flower," which showed how Falun Gong practitioners believing in "Truthfulness, Compassion, and Tolerance" were persecuted in China, she was very sympathetic. As a Christian, she believes it is wrong for a government to persecute people for their beliefs. She understood the resistance against the persecution.

Nancy said that she loved her profession and had her own opinions about art. She sincerely loved the performance, and her husband felt the same way.

In "The Lady of the Moon" and "The Loyalty of Yue Fei," the performers demonstrated their skills in highly difficult movements, such as advanced techniques in tumbling and acrobatics, and they have been highly praised by experts. Ms. Xie greatly appreciated the show from her professional point of view. "The performances were very professional in terms of choreography. The technical skills were very difficult. Every movement was very difficult and very specialized. It was very good. Very beautiful."