To promote local art and culture, the Legislative Yuan in Taiwan funded an international performing arts center in Kaohsiung, the Weiwuying Art Center, which is under construction at this time. On March 6, the head of the art center, Mr. Lin Chaohao came to watch the Chinese Spectacular with his wife. He said that the show manifested the essence of the 5000-year-old Chinese culture and reached the highest level of truthfulness, compassion and beauty. 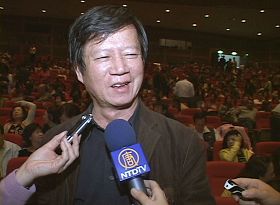 Mr. Lin said: "This show is precious because it introduces a pure and righteous culture to modern society. It is different than ordinary entertainment. The dances and music in the show have profound content, which impact and purify people's hearts. The Divine Performing Arts will hold five shows in Kaohsiung, which will have positive effects on the society."

Mr. Lin praised the background scene design, which is a perfect combination of traditional arts and modern high technology.

Mr. Lin said: "The first performance amazed me. When the curtain was opened, my heart was moved. Later, the dance 'The Risen Lotus Flower' also deeply touched me when I saw the brightness coming from heaven, breaking through the dark prison." Mr. Lin believes that the principle of "good meets good and evil is punished" demonstrated in the show will have a positive impact on the audience.

Mr. Lin said the show also manifested tolerance and respect for others. "There are different religions, but their goal is the same. The show demonstrated 'Truthfulness-Compassion-Forbearance," which is a universal principle. The whole society should promote this show so that more people can benefit from it."

Mr. Lin hopes that one day the Divine Performing Arts will hold shows in the Weiwuying Art Center after the construction is done.

“Retired General: I Sensed the Power of Compassion”