(Clearwisdom.net) On February 14, the Divine Performing Arts held the second Chinese Spectacular in Duisburg, and moved on to Frankfurt the next day. 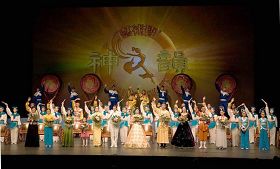 The second show of the Chinese Spectacular in Duisburg, Germany

(Clearwisdodm.net) Beatrice Mellinghoff is an editor of Boolibri Magazine in Ruhr and her husband Peter Lihs is a salesman. After watching the Divine Performing Arts Chinese Spectacular in Duisburg on February 14, the couple said that they had a great time as the show was "fantastic and very inspiring."

(Clearwisdom.net) The Nanning High School is a comprehensive school with junior and senior high schools combined. It is located in the suburbs of Tainan City in Taiwan. Since becoming the principal about two years ago, Mr. Yan Hongming has dedicated himself to improving students' moral character and life skills. At the end of 2006, the NTDTV Chinese New Year Gala was held in Taiwan. Mr. Yan bought 20 tickets for his core staff as gifts. When the Divine Performing Arts came to Tainan City in 2007, he did the same thing. For the upcoming 2008 Divine Performing Arts Shows, he again reserved 20 tickets. His generosity and kindness became something of a legend in the education circle. People appreciate what he did for the school.