Around noon on November 11, 2008, the annual Veteran's Day Parade was held in San Jose. Over 2000 people from 97 groups participated, including Falun Gong practitioners. 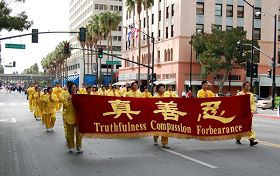 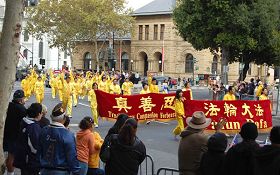 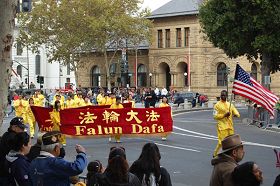 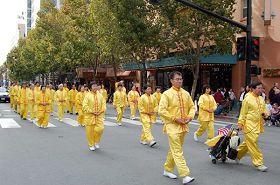 One of the organizers, Mr. Gene Fanucchi, chairman of Santa Clara County Veteran's Association, said that Falun Gong has been participating in the parade for many years. He praised the sincerity of the practitioners, and also praised Falun Gong for their performance at the Christmas parade every year.

Even though it was a Tuesday and many people had to work, the parade procession, which stretched over ten blocks, attracted many spectators. When the parade reached downtown San Jose, many people waved their hands to the practitioners and chanted "Falun Gong, Falun Gong!"

The parade organizers set up a few platforms along the route to introduce the participants. When the Falun Gong procession was marching by, the hosts announced that this was Falun Dafa also called Falun Gong, which is a cultivation practice. It can improve health.

On November 11 at 11 o'clock, in 1918, World War One ended, and the United States proclaimed this date as Veteran's Day. Many counties and cities have parades on this day and it has become a tradition in America.

“Validating Dafa is the Only Purpose”