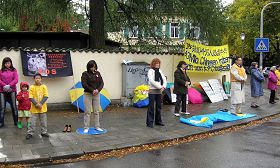 Falun Gong practitioners in Munich protest at the Chinese Consulate

Upon seeing the Falun Gong practitioners practicing the exercises in the rain, a lady came over and said, "I think what you are doing is great!" She signed the petition to show her support for Falun Gong. After reading the information about the Chinese Communist regime's organ harvesting from living people, a couple said, "I believe this kind of thing could happen in China. Take a look at the poisonous milk powder scandal just exposed in China. For a government that dares to ignore the lives of millions of babies, what bad things would it not be capable of doing?"

Since the beginning of this year, China has faced repeated natural and man-made disasters. The Chinese Communist regime has used, as always, its normal methods of deceit, high pressure and concealment in dealing with these events. This has made the situations much worse and many people have started to see through the ugly face of the regime. Many people have announced their withdrawals from the Chinese Communist Party and its affiliated organizations. To date, the number of people who have renounced the Chinese Communist Party organizations has reached over forty-three million, six hundred thousand. "The Chinese Communist Party is very empty now," a Falun Gong practitioner, Mr. Chen, told a reporter. "The latest example is that even before the launch of the 'Shenzhou-7' spacecraft, the Xinhua news agency--mouthpiece of the regime--issued a report on its website saying that the spacecraft had circled the Earth over thirty times. The description was so vivid, as if it were real. Because of the massive condemnation from many Internet users, the agency was forced to issue a public apology for the first time. This event, on the one hand, indicated that the regime is no longer so sure of itself. It also brought to light that the Chinese Communist Party's media has always deceived the people. This reminded many people of the lies spread by the Chinese Communist regime against Falun Gong, such as the Tiananmen self-immolation incident and others. These were all slanderous lies created by the regime's propaganda machine to defame Falun Gong. The Chinese Communist regime's latest performance indicates that it no longer considers the consequences of its lies. Like a desperate gambler, it has fallen into doomsday despair. The evil regime is desperately trying to delay its demise."

“Germany: Exposing the CCP Persecution During Oktoberfest in Munich (Photos)”