Germany: Exposing the CCP Persecution During Oktoberfest in Munich (Photos)

(Clearwisdom.net) On October 4, 2008, Falun Gong practitioners in Bavaria, Germany held activities in front of St. Michael's Church in central Munich to demonstrate the beauty of Falun Gong and expose the Chinese Communist Party's (CCP) brutal persecution. The event attracted attention from the local public as well as foreign tourists. Many signed a petition in support of Falun Gong and condemning the CCP organ harvesting from living practitioners. Some Chinese people also quit the CCP and its affiliated organizations. 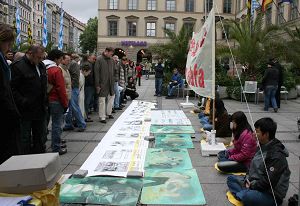 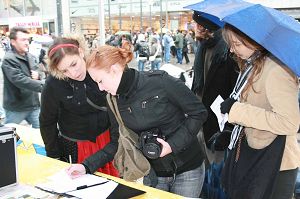 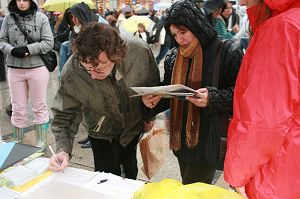 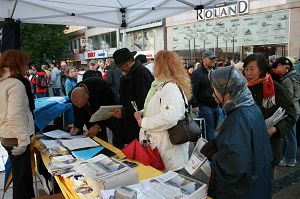 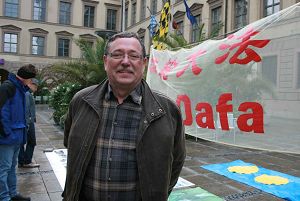 Mr. Parchulek, a real estate manager who lived in former Eastern Germany for 40 years, said he knows clearly what the Communist Party is about


This event took place near the end of the Oktoberfest, the biggest annual folk festival in the world, and tourists from around the world still packed the inner city. Even though the weather was not ideal, the sporadic rain did not stop Falun Gong practitioners from exposing the evil nature of the CCP. Practitioners distributed leaflets about the masses who are quitting the CCP and its affiliated organizations, Eutelsat's dropping of New Tang Dynasty TV (NTDTV) signals under the CCP's coercion and enticement, the truth about Falun Gong, and the CCP organ harvesting from living Falun Gong practitioners. Practitioners peacefully demonstrated the exercises, which attracted many passersby, who stopped to watch. Many visotors carefully read the material exhibits and introductions. Some also asked why the CCP persecutes Falun Gong, and also asked for details about Falun Gong.

A real estate manager, Mr. Parchulek, brought two of his neighbor's boys to the Oktoberfest. At St. Michael Church, they noticed the practitioners exercising and stood there to watch. When asked whether he would like to sign to condemn the CCP, he agreed without hesitation. Later he said that they came from Leipzig, of former Eastern Germany. Having spent forty years under the Communist Party, he said he knew exactly what the Communist Party was about. Thus he could imagine how the CCP committed the atrocious crimes. The Communist Party is capable of anything. Pointing to the two boys next to him, he said at their ages they no longer know the evil of the Communist Party. He said, "I watched the Beijing Olympics on TV and got a whiff of the CCP's tyranny." He stressed that he did not like it at all.

Four Germans, some Slovakians and one from another country who spoke fluent Chinese also came over to sign the petition. They had been learning Chinese for three years, one of which was spent in China. They had already learned the true facts about the persecution in China since many Falun Gong practitioners had talked with them. They all knew that Falun Gong is good, which was the reason why they wanted to sign to support Falun Gong practitioners.

Many Chinese people also passed by. The older ones accepted truth-clarifying materials rather easily. Some youngsters however, have been poisoned by the CCP lies since childhood. It was relatively more difficult for them to accept the true facts. But they longed for the truth. Some looked on from far away, and some took many photos. One young girl told practitioners that her parents both came from China. While growing up in Germany, she had often read articles in the newspapers about Falun Gong practitioners being persecuted by the CCP. After signing to support Falun Gong, she most of all wanted to know what Falun Gong is and why the CCP persecutes it. The practitioners told her that Falun Gong follows the principles of Truthfulness-Compassion-Forbearance, which forms a stark contrast with the CCP's deceit, evilness and tyranny. The CCP also could not tolerate the rapid increase in the number of people practicing Falun Gong, hence the persecution. Through nine years of persecution however, not only did the CCP not achieve what it intended, but it also now faces disintegration. Another young girl came over after talking with a few friends who stood far away, and asked for Falun Gong truth clarification materials. She told practitioners that she had quit the Communist Youth League on the web. She said, "I love to read these leaflets. What you are doing is great."

“Taiwan: Young Practitioners Get Together to Exercise and Study the Fa (Photos)”