(Clearwisdom.net) The Divine Performing Arts New York Company performed its Chinese New Year Spectacular at the Hilton Theater in Las Vegas on January 21, 2008. The audience applauded again and again, and some even cheered and gave the show a standing ovation. 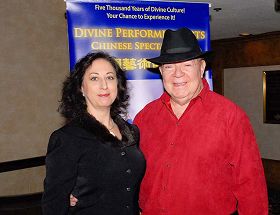 After the show, Robert Corfeley and his wife, Heather Corfeley had high praise for the performances, and expressed much gratitude toward the Divine Performing Arts for visiting Las Vegas. "Thank you for bringing the truth to us and the world," they said.

Robert said, "The show tonight displayed the values of freedom of thought and freedom of expression, and a fight for the right to practice Chinese traditional meditation. We witnessed what was really happening [the persecution in China], and we hope these things will change.

"The message of 'Truthfulness, Compassion, Forbearance' displayed on the backdrop is very clear. These words appear in all great scriptures, like the Hebrew Bible, Christian Bible. It is the same message. We have come from the same place, so I am very happy to be able to see the show here."

He added, "Recently, when my wife and I went to New York for work related business, we heard about the show there and wanted to see it then. However because of our tight schedule, we could not go, and we were very disappointed." Robert continued, "A week ago, when I returned home to Las Vegas, I saw the advertisements for the show in Las Vegas. So I said to Heather, 'See, this is a predestined relationship.' Everything happens for a reason, we had been granted another chance to see the show with friends. This has been a great experience for us."

Robert continued, "These dancers have young faces, and power from within. Their performances have very strong energy. From the audience feedback, we know they liked them very much." He also exclaimed, "A show like this can be performed in any corner of the world. It can go to Russia, South America, and does not need any translation or interpretation, I think people will understand the messages it conveys, and it is due to the hard work of the performing group." Finally, he wished the Chinese Spectacular continuing success.

Robert Corfeley had been a senior media producer. He once interviewed Song Meiling [the wife of Chiang Kai-shek], and began working for CBS in the 1960's. Later he was transferred to NBC headquarters in New York. Prior to his retirement, Robert also worked at WMAL Radio Station in Washington DC. "Now my wife Heather and I are business partners. We design artwork for the souvenir shop in the Las Vegas Casino," he said, before he asked his wife to show reporters a necklace and business card holder from their designs.

Heather pointed to her ruby necklace and said, "You see, we designed this especially for the Chinese New Year." She also spoke of her thoughts about the Chinese Spectacular, "I feel almost exactly the same as my husband. He spoke with you from our philosophical perspective. From an artistic point of view, I very much liked the caliber of the show, the choreography, and the dancers. They have been through quality training, and are very elegant. The costumes are beautiful too."

Heather added, "I have studied dance before, so I understand the high caliber of this dancing, and I really enjoyed it. The messages that the show conveys are very clear, and that was one of our favorite aspects of the whole performance.

"We sat right by the orchestra. It was fantastic, because we could hear [the music] directly, it wasn't through a microphone. The dancers and musicians were beautiful, the choreography was great, and the costumes were wonderful.

"From the entire performance, and through the expressions and movement of the dancers, I can understand what they want to convey, it is very clear. The MCs would use a minute to explain the act, which was very helpful, but not necessary. I feel that when you open your mind, you can understand the meanings."

She also stated, "The singing was great. Divine Performing Arts has done very well, and expressed the message very clearly. I am very glad that Divine Performing Arts could perform here. You know, 400 years ago, our ancestors were persecuted for their beliefs in England. They escaped from their homeland, and came from England to America on the Mayflower, in search of freedom of expression, freedom of belief, and freedom to live their lives as they chose. This was their aim in traveling such a long way, from England to America, and the reason our Constitution was written, in order to establish this lifestyle for us.

"I thank the land of America, where people can come from different countries around the world. It is just like the performance, 'The Power of Awareness' in the show tonight, which tells the world about the persecution [of Falun Gong]. Each one of us should express this, and let the world understand, in the hope that more will join in to change the world."

Regarding the upcoming Beijing Olympics, Heather stated, "There are so many people in China, just like you [addressing the reporter, who is Chinese], but the politics there are not good. I don't think they [the Chinese Communist government] should be allowed to host the Olympics, because many people suffer persecution in China. I feel this government does not deserve this honor. We should discern right from wrong, and we can't go with the flow for profit, or political aims. That is not good."

She summed up her feelings about the evening's performance. "I think the show is very good. It has used such a beautiful and peaceful way to let the world understand what has really happened. I hope we can all elevate together, to make this world a better place. I hope you continue in your endeavor, and I thank you for bringing the show to us."