On the night of January 17, the New York company of the Divine Performing Arts staged the fourth and final performance of the Montreal stop of it's Chinese New Year Spectacular. 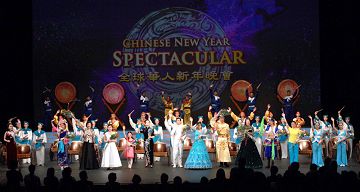 Thousands of people from all walks of life and ethnic backgrounds watched the show, which celebrates traditional Chinese culture.

An art professor from McGill University came to the show with his wife and twin daughters. The whole family are fans of Chinese culture. The two girls are learning Chinese martial arts, dances and songs. 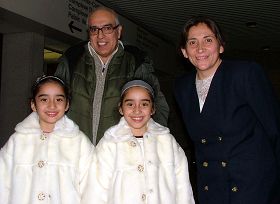 An art professor from McGill University came to the show with his wife and twin daughters.

They all liked the costumes and dances in the show. The family's favorite was the dance "Snowy Mountain, White Lotus." The professor said the show gave him a lot of hints that will help in his artistic endeavors. He praised the dancers as "angels from heaven."Robert Gaiz, a priest, said that he enjoyed the show very much. The Erhu solo deeply touched him and he felt energy in the Mongolian dance.

Dong Yifan, a college student, said: "It is very rare to see a show with genuine Chinese culture. This is a good thing." He said: "The dances and costumes are beautiful and the background designs are vivid."

Ms. Wu kept saying, "It was wonderful," and asked about the next show. She said: "I don't practice Falun Gong, but I don't think the persecution of Falun Gong is right."

A senior Chinese immigrant from Guangdong said, "The performance about Falun Gong would be banned in China. But I am telling you: Falun Gong is very good. I respect Master Li Hongzhi. I know other people may be afraid of saying so, but I am not afraid. I am 79, so I am not afraid of anything."

Qianghua, a businesswoman, came to the show with her daughter. She liked the whole show, especially the dance the "Fruits of Goodness." She said: "It purifies one's heart, and is very encouraging."

Mr. Marcel Leonard of Montreal came to the last show with his wife. He said they enjoyed the show very much, because it was entertaining and spiritual.

He liked the drum dances the most, and also the piano solo. He said the pianist put her life into the performance, so it was very touching. He enjoyed the piano playing very much, although he didn't know the title of the song.

Mr. Leonard said: "I learned a lot about Chinese culture, especially Tang Dynasty culture, from the show. I had no idea about all this before. It was as if God showed a new culture and a new way of life to us. The show made me think of my own life. It was very shocking. I didn't want the show to end."

Mr. Zhao, a real estate agent in Montreal, said: "The dances exposing the persecution of Falun Gong made me sad. I have seen a lot of shows in China, but this one is incomparable from the aspects of both form and contents. I know that a lot of Chinese want to come, but they are afraid of the Chinese government. I am not afraid of them."

Mr. Zhao's wife wanted to come, but she had to teach a class. Mr. Zhao said: "Maybe I will take her to New York to see the show at Radio City."