The touring company of the Divine Performing Arts staged four performances of the Chinese New Year Spectacular at the California Center for the Arts in San Diego, California. The shows were held from January 15 through 17.

The last show in San Diego 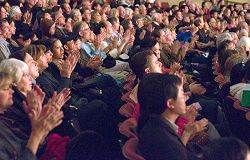 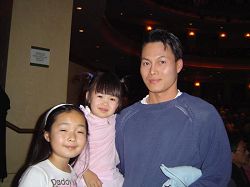 A Chinese-Vietnamese came to the show with his daughters. He said: "My daughters asked me if we could come."

Ms. Chen Youbai, a lawyer in San Diego, said: "It is a very good show." "I always thought that it is hard for a man to dance. But in 'The Courage of Yue Fei' and the drum dances, the actors performed very well." "Of course, the actresses were very good too... Their movements were very graceful."

She liked the Mongolian dance and the drum dances. Ms. Chen came to the U.S.A. 40 years ago. She likes opera. She said the Chinese New Year Spectacular was very entertaining and was one of the best shows she had ever seen.

A Chinese-Vietnamese man from San Diego came to the show with his daughters. He was glad that his daughters had a chance to learn the culture of their ancestors. He said: "My daughters asked me if we could come." Hanna, his younger daughter, said the show was excellent, and that she had never seen such a show before.

Many people expressed that the show was great and they would recommend it to their friends.

“Member of the Audience in Montreal: "The show made people think about the purpose of life" (Photos)”