Australia: Attendees of the APEC's Health Ministers Conference Are Concerned about the CCP's Organ Harvesting (Photos)

Many media came to the press conference and reported the activity, including the 10 TV networks in Australia, Agence France-Presse (AFP), Australia Associated Press (AAP), NTDTV, and Sound of Hope Radio. A European reporter was shocked by the brutality of the CCP. He said that he would ask the Chinese Health Minister about it at the APEC press conference on Friday. Many local citizens signed their names on the petition to support Falun Gong practitioners. 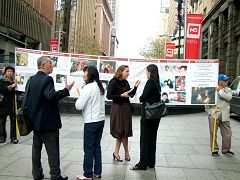 Clarifying the facts after the press conference 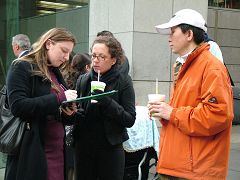 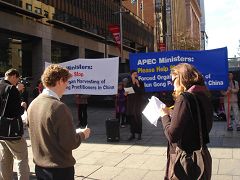 At 11 a.m., the press conference was held at Partin Place. Mr. John Deller, the spokesman of the Falun Dafa Association in New South Whales, spoke. He said that Falun Gong practitioners had already written to the Australia Health Minister, asking him to inform other health ministers about this news and to ask the Chinese health minister to investigate the allegation. Mr. Deller called upon the Australian and other government to help stop the organ harvesting. 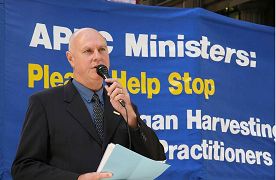 According to the Australian Associated Press, two major Australian organ transplant hospitals, Prince Charles and Princess Alexandra, have banned the training of Chinese surgeons due to concerns that China takes organs from executed prisoners. Mr. Deller hoped that more hospitals would follow suit. He urged the Chinese government to allow independent groups to conduct investigations in China. He also warned Australians who are planning to have organ transplants in China that the organ they rreceive might come from an innocent person.

Ms. Liu Jinghang, who was jailed for three year because of her belief in Falun Gong, offered indirect evidence of the organ harvesting at the press conference. Ms. Liu was a researcher at the Chinese Academy of Science. After 1999, she was arrested six times and sentenced to three years because she refused to renounce Falun Gong.

She said that from June to November 2000, when she was jailed in Xicheng Detention Center in Beijing, she and other Falun Gong practitioners had comprehensive physical examinations. But other criminals in the same detention center weren't examined. On July 18, 2000, five policemen took Ms. Liu to Qinghe Emergency Care Center in Beijing and tried to take a blood sample from her. Because she refused to cooperate, she was restrained and doctors injected her with unidentified drugs. Both practitioners and other criminals in the detention center thought it strange that the CCP would torture practitioners, but was willing to spend money on physical examinations for them.

On November 29, 2000, policemen forced Ms. Liu and five other practitioners to have comprehensive physical exams and took the blood samples from them.

Ms. Liu said: "A lot of practitioners were transferred elsewhere. Nobody knows what happened to them. I had heard the police saying that they had orders from above that they should shoot the Falun Gong practitioners. Now I realize that the CCP treats practitioners as death-row criminals and sources of organs. That is why they gave us free physical examinations." Ms. Liu called upon the international community to take actions to stop the CCP's brutality.

Beginning on Monday, Falun Gong practitioners distributed materials, collected anti-persecution signatures, and held up "fact-clarifying" banners at Martin Place, outside of the APEC conference. Many local people accepted the materials and signed their names on the petition. Practitioners passed out thousands of materials everyday. On Wednesday, they passed out more than 8000 flyers. 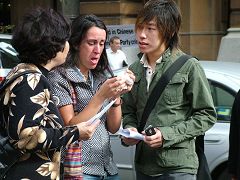 Jessica cried when she learned about the organ harvesting

Jessica Porler of Sydney cried when she learned about the organ harvesting. She said that it is brutal and the whole world should condemn the CCP's sin.

Many attendees of the APEC conference also accepted the fact-clarifying materials. A Japanese attendee said that this information is very important, because a lot of Japanese go to China for organ transplants every year, and they needed to know about this.

Since the organ harvesting was exposed in March 2006, more and more governments and people have been concerned about it. Last year, Mr. David Kilgour and Mr. Edward McMillan-Scott, the vice-President of the European Parliament, visited Australia and gave a series of speeches. They helped the political parties in Australia to create an agreement, urging the Chinese government to allow the international community to conduct independent investigations of the allegation.

Ms. Kay Rubachek, the host of the press conference, told about the Coalition to Investigate the Persecution of Falun Gong (CIPFG), which has more than 70 members from different political parties, including parliament members, lawyers, doctors, and other professional people. The CIPFG has written to the Chinese Embassy and Consulates in Sydney and Melbourne, requesting an independent investigation of the allegation.

During the APEC Conference of Health Ministers, from Wednesday to Friday, Falun Gong practitioners held a series of fact-clarifying activities outside the Westin Hotel, where the conference took place, raising awareness of the organ harvesting.

“Kansas: Clarifying the Truth at the Olathe Americana Jubilee (Photos)”