Kansas: Clarifying the Truth at the Olathe Americana Jubilee (Photos)

On June 3, 2007, Falun Gong participated in the 2nd Americana Jubilee, a multi-cultural festival in Olathe, Kansas. The practitioners answered questions from the visitors and told them how the Chinese Communist Party (CCP) cruelly persecutes kind and honest Falun Gong practitioners in China. Many people asked for details of when and where they could learn the exercise after understanding the truth. 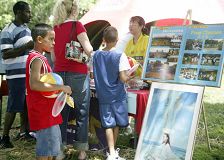 "Thank you for coming here to tell us about Falun Gong!" said an older man who came to the Falun Gong booth and talked to a practitioner shortly after the booth was set up. The man was in Washington, DC, in July 1999, where he saw the Falun Gong practitioners appealing to Chinese government to stop the persecution of Falun Gong. Since then, he has kept an eye on the situation of the persecution. At the Americana Jubilee, he met Falun Gong again. He was excited and encouraged the practitioners, "You'll win the victory by perseverance."

An older Chinese man who was visiting his children in America came to our booth. He read many of the truth-clarification materials intently and then raised his thumb to a practitioner and said, "You've done a great thing. The Communist Party is very evil. Actually, there are hardly any Chinese that have not been suppressed by the CCP. The Nine Commentaries on the Communist Party is a very well written book."

A few thousand people came to the Americana Jubilee including some local Chinese residents. Many people saw the Falun Gong booth and heard the song "Falun Dafa Is Great".

“Australia: Attendees of the APEC's Health Ministers Conference Are Concerned about the CCP's Organ Harvesting (Photos)”