On June 5, 2007, a forum entitled "Exposing Organ Harvesting in China" was held at the New York State Capitol in Albany, New York. Assemblyman Jack McEneny listened to speeches given by Falun Gong practitioners, David Kilgour, and others. He said that we need to do everything we can to correct this incredible abuse of human rights. 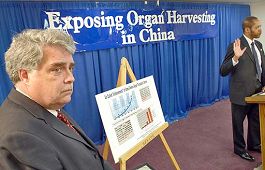 Assemblymen McEneny and Benjamin speak at the forum on organ harvesting

New York's Times Union newspaper reported on June 6, 2007, that David Kilgour, a former member of Parliament and secretary of state in Canada, spoke Monday in Albany at a legislative forum and urged state lawmakers and health department officials to post public warnings for New Yorkers about organ harvesting. Kilgour said at the forum, "The evidence is overwhelming."

The article said that the allegations of Chinese citizens being imprisoned and murdered and their bodily organs sold for tens of thousands of dollars sound so gruesome and far-fetched that they defy imagination. But a growing body of evidence that seems to confirm the grisly practice has led to a groundswell of demonstrations and calls for boycotts of the 2008 Olympic Games in Beijing if the Chinese government, which denies "organ harvesting," does not allow an independent investigation.

Those allegedly targeted in China for persecution, imprisonment, and even slaughter for their organs are members of Falun Gong, a practice meant to enliven mind, body and spirit. There are an estimated 70 million Falun Gong practitioners in China. Many have been imprisoned in large numbers by Chinese authorities since 1999.

Kilgour and co-author David Matas, who wrote the investigative report "Bloody Harvest," estimate that 41,500 organ transplants using Falun Gong prisoners have been done in the past five years.

Kilgour conceded he has not personally witnessed such atrocities, but based the report on phone interviews with former detainees and websites of organ transplant brokers in China. Kilgour described a large and lucrative underground industry of "organ tourists" who travel to China to receive an organ transplant in a week or two after waiting months or years in the United States.

Kilgour said, "We need to stop people being killed on demand like lobsters in a tank."

Several state legislators listened to accounts from Kilgour and others, including Falun Gong members who had been harassed or detained.

Assemblyman Jack McEneny said he was setting up a meeting with State Department of Health officials. He said, "We need to do everything we can to correct this incredible abuse of human rights."

The original text is from http://www.timesunion.com/ASPStories/Story.asp?StoryID=595523&Category=STATE&LinkFrom=RSS

“Australia: Attendees of the APEC's Health Ministers Conference Are Concerned about the CCP's Organ Harvesting (Photos)”

“What a Young Western Practitioner Has Seen with His Third Eye”