CIPFG: Open Letter to Leaders of China Proposes a Timetable to End the Persecution (Photo)

(Clearwisdom.net) The Coalition to Investigate the Persecution of Falun Gong in China (CIPFG) wrote to China's president Hu Jintao and Prime Minister Wen Jiabao, demanding an end to the persecution of Falun Gong, and to the persecution of Mr. Gao Zhisheng, a renowned Chinese human rights lawyer, in the next two months. The letter points out that it would bring shame to China if the Olympic Games were to occur while China's crimes against humanity continue to exist. 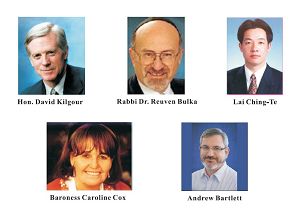 The following is the letter:

We are from the Coalition to Investigate the Persecution of Falun Gong in China (CIPFG), which has over three hundred legislators, government officials, religious leaders, lawyers, medical doctors and human rights advocates from Europe, Asia, North America and Oceana. We respectfully request your government to cease the persecution of Falun Gong practitioners and its supporters, and to allow an independent international investigation of the state-sanctioned organ harvesting allegations.

We understand that this crime against the humanity is not instigated by the two of you. We are aware that both of you have also attempted to put an end to this genocide campaign that has involved almost all the people of China. We see humane qualities in you and a sense of responsibility as leaders of the state. This is one of the reasons why we decided to write to you.

We are not hostile to China. In fact, we love the Chinese people. We hold in high regard the five-thousand years of Chinese civilization. Please remember that one day history will write its verdict on what you choose to do, just as it did to all previous rulers of China. Fortunately, you still have an opportunity to choose kindness rather than hate.

The 2008 Olympics is an opportunity for the people of China. When the international community awarded the 2008 Olympics Games to China, they expected that the Chinese people would benefit in many different ways, including in the matter of their basic human rights.

Nevertheless, we regret to note that since 2001 overall human rights conditions in China have deteriorated to the extent to that hideous crimes, such as organ seizures, are still happening.

We believe that it would be a shame to humanity as a whole if the Olympics and crimes against humanity were to take place simultaneously in China. Therefore, we request that you stop the persecution of the Falun Gong practitioners and "prisoners of conscience" such as human rights lawyer Gao Zhisheng.

Whether or not more calls for an international boycott of the 2008 Beijing Olympics will occur depends on your decisions on these important issues in the next two months.

Coalition to Investigate the Persecution of Falun Gong in China (CIPFG)