New Yorkers Get a Taste of the Profound Chinese Culture (Photos)

The third "Holiday Wonders" performance was held at the Beacon Theatre in Manhattan on December 20. As in previous shows, the audience was deeply attracted to the profound Chinese culture demonstrated on stage. 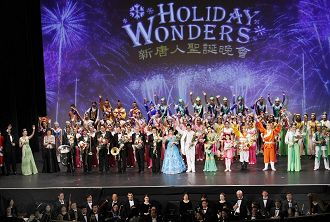 The end of the show 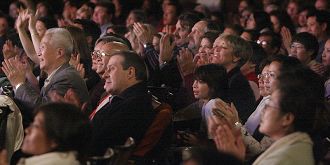 The audience warmly welcomes the performance. 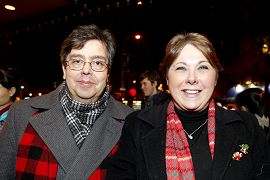 Miguel Angel Diaz Urbano and his wife, from Venezuela 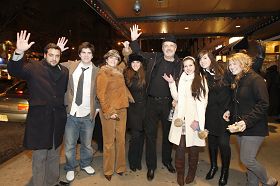 Liam O'Neil, a Chinese teacher from Goshen Middle School, brought 35 of his students to the show. He said the show was really wonderful, and the dances were like moving pictures, telling people appealing stories. Liam's students liked "Drummers of the Tang Court", which also caught the attention of many others, such as Liz and Kari Fromwiller, restaurant owners in New York City, and Paul Chin, a businessman. They all agreed that the drum dance was a perfect combination of beauty and power.

Mark Lamura of New York City, an actor, liked the traditional Chinese dances in the show, which he found was very different than ballet. Amber Ward and her daughter Emily liked the dance "Water Sleeves," which gave them a peaceful feeling.

A Taste of profound Chinese culture

Miguel Angel Diaz Urbano and his wife are from Venezuela. Ms. Urbano said she never saw a show that was able to so perfectly combine traditional Eastern and Western arts. She was amazed by the rich Chinese culture.

Ms. Urbano was particularly attracted to the use of colors in the show. The colors of the background and costumes were bright, and harmonious, rich and not repetitive.

Ms. Urbano was touched by the dance, "The Power of Awareness," which tells the story of Chinese police publicly assaulting a mother and child who practice Falun Gong. But onlookers, empowered by having just learned the truth about the practice from the couple, feel compelled to step in to stop the abuse in a remarkable show of humanity.

Vincent Forras of New York is a retired fireman who was among the "9.11" rescuers. He and eight other family members watched the show and were also deeply touched by "The Power of Awareness ." Ms. Forras said that she cried during the whole dance. She'd heard about the Chinese Consulate's interference with the show. She said that the CCP's policemen are really evil. Mr. Forras's son-in-law-to-be is a medical school student from South Africa. He described the show as "magical" and "spiritual" and said that "The Power of Awareness" was very encouraging.

Mr. Forras had fought fires during "9.11," and saw his co-worker die in a fire. This extraordinary experience taught him to treat people with love instead of hate. As a founder of "Gear Up Foundation", which was created to help the victims of "9.11," Mr. Forras said that he would recommend the "Holiday Wonders" to the families of the "9.11" victims. He has heard about the persecution of Falun Gong and hopes that with everybody's help, the Chinese people will have freedom some day soon.