The 57th Seafair Torchlight Parade was held in downtown Seattle on the evening of July 29, 2006. Falun Gong practitioners were invited again this year to participate in this parade. Their procession included the "Grand Fa Boat" float, unique and colorful Chinese traditional dancing, lion dancing, a waist drum team and a Falun Gong exercise demonstration. Approximately 30,000 spectators along the parade route and 70,000 TV viewers watched the parade. 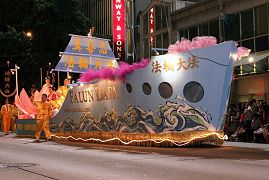 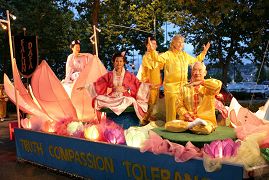 Exercise demonstration on the float

The annual Seafair festival is a grand fair in the Pacific Northwest. There are more than thirty series of events running from July to the beginning of August. The most popular event is the Seafair Torchlight Parade, known as the "Gem of Seattle." It is listed as one of the ten largest parades in the US. Every year there are groups from overseas who come to participate. In this year's parade, Falun Gong practitioners from Washington, Oregon, Montana, and Idaho and some from Vancouver, Canada participated in the event. They won warm acclaim and applause on the 2.5 mile-long parade route.

The Falun Gong procession was led by five practitioners in traditional Chinese costume, holding a banner worded, "Falun Dafa." When the spectators saw the procession, they applauded warmly. Many people shouted, "Falun Gong!" and gave the thumbs-up sign. 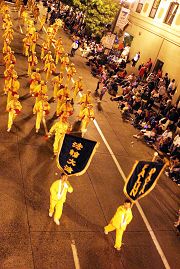 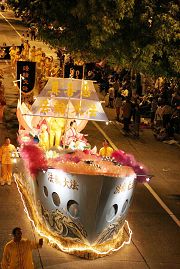 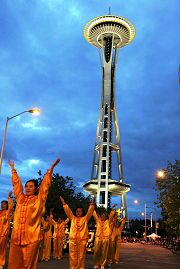 When the "Grand Fa Boat" float appeared in the parade, people cheered and praised it highly. It was one of the most impressive floats in the fair.

The Seafair festival originated in 1950 and got its name because Seattle was called the "boating capital of the world." The Navy and Air Force dispatched a warship, an aircraft carrier and the Blue Angels, the Navy Flight Demonstration Squadron, to perform during the fair. This year the theme of the parade was related to the sea. The practitioners' float was named after a Falun Gong book entitled, Guiding the Voyage.

On the sides of the boat were the golden words, "Falun Dafa," in both Chinese and English and web address for a Falun Gong website. On the high sail were written the words, "Falun Dafa" and "Truth-Compassion-Tolerance" in golden Chinese characters. The Golden Falun was set on top of the mast. Lights and colorful lotus flowers decorated the boat, making the float look very beautiful and graceful.

Seven practitioners of different ages and different races demonstrated the Falun Gong exercises on the float.

Following the float was a waist drum team with two practitioners holding banners worded, "Falun Dafa" in front. The team members played along with the music, "Falun Dafa is Good" and "Jubilation." Their performance won warm applause.

Lion dancing was next in the procession. The Falun Gong exercise demonstration team and a large banner worded, "Truth-Compassion-Tolerance" brought up the end of the procession.

Local TV Station KIRO 7 carried a live broadcast of the parade. When the practitioners' procession entered the TV coverage site, the TV host praised the group: "Such beautiful costumes! They're holding lotus lanterns!" "Wonderful!" The host also told the audience that the practitioners were from the Pacific Northwest and had participated in more than 70 parades in the past several years.

There were many Chinese spectators smiling as the procession passed by. Many people shouted, "Falun Gong!" "Wonderful!" "China!"

Some spectators said later, "Falun Gong's procession is magnificent!" "The fairy ladies are very beautiful!" "The grand boat is huge!"

“Germany: Practitioners Rally in Munich to Support the 12 Million Withdrawals from the CCP (Photos)”