Germany: Practitioners Rally in Munich to Support the 12 Million Withdrawals from the CCP (Photos) 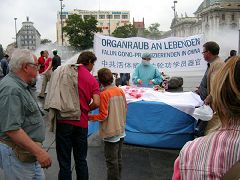 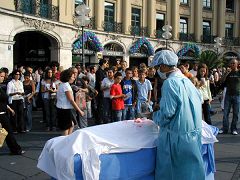 With the wide spread of the Nine Commentaries on the Communist Party, the CCP regime's fear and panic is increasing. So it extends the persecution of Chinese people, especially Falun Gong practitioners. The CCP even doesn't cover up their persecution to the outside world. For example, they publicly persecuted Gao Rongrong, a well known Falun Gong practitioner, to death, imprisoned the Falun Gong practitioner who had met with the vice-president of European Union and deported the translator, who was an American citizen. The CCP destroys evidence of the organ harvesting.

Karlsplatz Square is at the busiest area in Munich. Thousands of pedestrians and tourists pass by. Many people immediately came over to ask about practitioners' display. When people realized the crimes committed by the CCP, they were shocked and indignant. Many people signed a petition to stop the atrocities at once. Many Chinese tourists visit Karlsplatz Square. Many of them accepted Falun Gong newspapers and talked to practitioners. Some quit the CCP on the spot.