Graduate student Lou Hongwei came to the U.S. from Cambridge University, United Kingdom, to host a press conference in front of the Chinese Consulate in San Francisco, California on July 31, 2006. She asked for help to rescue her husband, Mr. Pu Dongwei, who was abducted from his home in Beijing by the Communist authorities two months ago. Ms. Lou said that she had been looking for his whereabouts for the past two months but still didn't have a definite answer about where and how he is. She requested the Chinese Communist Party (CCP) to release her husband and called for the attention of the international community to help stop the CCP's killing of Falun Gong practitioners in secret concentration camps. 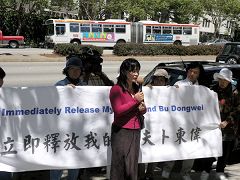 Lou Hongwei requests the CCP to immediately release her husband, Falun Gong practitioner Pu Dongwei, at a press conference in front of the Chinese Consulate in San Francisco, California

Lou Hongwei heard that her husband was abducted on May 20 when she called her parents in China. They said that about seven or eight policemen from the Haidian District Police Department went to his house on May 19, 2006. After they entered the house, the policemen wanted Mr. Pu to hand over the Nine Commentaries on the Communist Party books. Pu Dongwei answered that he didn't have any. The policemen began to search his house and found some books about Falun Gong. Then they took him and his computer away. The police didn't give the family any warranty or document about taking away Pu Dongwei and the family doesn't know his whereabouts.

During the past two months, Lou Hongwei has been searching for her husband from many sources. She called the China National Security Bureau Haidian Beijing branch and wrote a letter to the Beijing City Government. She said when she called the Haidian branch, the person on the other end immediately hung up the phone after hearing the purpose of her call. When she dialed the number again, the person on the other side said, "This is a private phone." As for the letter to the Beijing government, the city government gave her a reply saying they had transferred her letter to the Beijing Police Department and no more information has been given since then.

Pu Dongwei works for the Asia Foundation to provide legal services to underprivileged groups. Lou said she came to San Francisco because this is where the headquarters of the Asia Foundation is located. She had made an appointment with the vice president of the foundation to talk about possible rescue channels on Wednesday.

Mr. Pu and Ms. Lou have an 18-month-old daughter. She said the girl is now with her grandparents.

Ms. Lou and Mr. Pu both started practicing Falun Gong in 1996 in Beijing. They lived happily before July 1999, when the CCP started the persecution of Falun Gong. In June 2000, the couple wrote a letter to the government explaining to them the facts about Falun Gong. For the letter, they were sentenced to one year of forced labor without a trial.

Lou Hongwei recounted how she was jailed in Beijing Women's Forced Labor Institute. A guard once threatened her that if she didn't renounce her belief, they would send her to a concentration camp in northwest China where nobody can return alive. She said the so-called concentration camps were the Chinese Communist Party's live organ bank. CCP operatives harvest the organs of steadfast Falun Gong practitioners to sell for profit.