Before sunset on February 15, practitioners gathered in front of the Chinese Consulate in Melbourne to protest the Chinese Communist regime for harassing and assaulting Falun Gong practitioners outside of China using the methods of gangsters. The protest continued until 9 p.m. 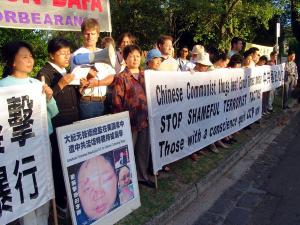 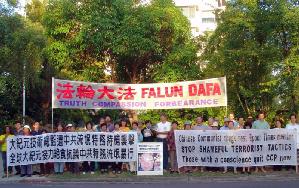 In the past several years, the CCP has deployed a multitude of secret agents worldwide to sabotage Falun Gong practitioners' truth-clarifying activities. In Ireland, for example, several practitioners' homes were broken into. During those cases, practitioners typically didn't lose many valuables, while equipment used to clarify the truth about Falun Gong was stolen. In at least one case, a practitioner's home was searched. However, nothing was stolen, and it seemed that the intruders were looking for important information.

During the protest, practitioners also read Master Li's new article "Eliminating the Evil" aloud to warn overseas secret agents and spies that they will face the same fate as those involved in the Atlanta assault incident if they don't quickly abandon their evil path. 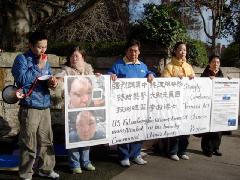