On February 11, 2006, just prior to the Lantern Festival, more than 300 Falun Gong practitioners came to Central Square in front of Chungcheng Memorial Hall to conduct a large-scale group practice and to expose the recent incident in Atlanta, GA, where Chinese Communist secret agents violently attacked Falun Gong practitioner and chief technical officer of The Epoch Times Dr. Peter Yuan Li in his home. Tens of thousands of visitors who came to see the lanterns were shocked at the CCP secret agents' persecution of an American citizen in broad daylight. 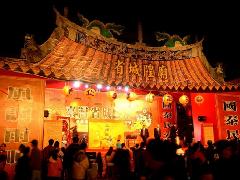 Chunghuang Temple in Chungcheng Memorial Square, where many people enjoyed themselves by trying to solve the riddles written on the lanterns

When they saw the photos of Dr. Yuan Li after he was attacked, many visitors were surprised that in a country like America, where freedom and human rights are respected, CCP agents dared to run rampant and commit such an evil deed. They asked if the police had arrested the perpetrators yet and if the American police were paying attention to such a serious case. They also asked why the CCP would do this, why the CCP suppresses such a peaceful group like Falun Gong, and why they CCP is so scared.

After practitioners gave a detailed explanation, the visitors had a clearer understanding of the CCP's evil nature and expressed their support for the Falun Gong practitioners' efforts.

During the evening of the Lantern Festival on February 12, in a sea of lanterns and people, a bright yellow banner reading "Falun Dafa is Great" drew people's attention. Some people from outside of Taiwan read, "Falun Dafa is Good" and then said that they would go to the website to learn about Falun Gong. Some visitors smiled at the practitioners and gave them a thumbs-up. Some young people were curious and had their photos taken in front of the big banner. Some children who were just able to recognize the words read, "Falun Dafa is Good" word by word, and then raised their heads to ask their mothers what they meant. Their mothers carefully explained to them while holding the materials just received from practitioners.

Several volunteers encouraging people to quit the CCP held display boards with the current number of withdrawals from the CCP. People were very surprised that the number of withdrawals from the CCP is close to 8 million. Some immediately took out cameras or cell phones to take pictures of the display boards. An older woman walked up to a volunteer worker and said encouragingly that she knew that the CCP has committed innumerable crimes and that all Taiwanese should know this information. Without the CCP, China would have new hope.

The Lantern Festival is a good opportunity for the whole family to see colorful lanterns and eat sticky rice balls. But in Mainland China, hundreds of thousands of Falun Gong practitioners are still suffering persecution. Many of them are homeless to avoid the persecution, many have been incarcerated in prisons, and many have been tortured to disablement or death. Children have lost their parents, been deprived of the opportunity to attend school, and no longer have warm homes to return to. Many kind people have been deprived of their right to live a normal life and make a living, and have lost their loved ones. In the face of such tremendous tribulations, practitioners still peacefully persist in their belief. Though many people have learned about all these facts, due to the CCP's political and economic pressure and influence, many media outlets and people have chosen to disregard the persecution of Falun Gong. Even so, over the past six years practitioners inside and outside China, without complaint or regret, have walked every corner of China and the world to spread the truth to kind-hearted people in the hopes that more people will help stop this persecution.