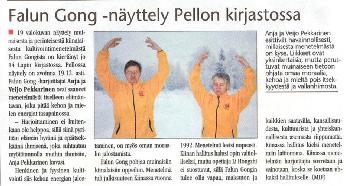 The Pekkarinens, Anja and Veijo, demonstrate the Falun Gong exercises

The report stated that nineteen photos of the traditional Chinese practice Falun Gong have been displayed in 14 libraries in the Lapland region. They were brought to Pello on December 12 (2005). Falun Gong practitioners Anja and Veijo Pekkarinen found a new life from cultivating Falun Gong and their bodies and spirits were balanced.

Anja said that cultivation is not easy as one needs to strive to be selfless and good, and treat others with compassion.

The report stated that physical changes are accompanied by spiritual elevation. Falun Gong has its roots in ancient principles and was first publicized in China in 1992. The practice then quickly spread around the world. Falun Gong is free and has no commercial interest. Anyone is welcome to learn the practice regardless of one's nationality, cultural or social background. The Chinese communist regime banned Falun Gong in China (in 1999) and started to persecute the practice.

The exercises of Falun Gong are very simple, using ancient principles to teach people to cultivate their virtue and relinquish selfishness and the desire for power.