"I Have Lost My Mommy, I Cannot Lose My Daddy" (Photo) 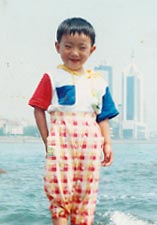 Her name is Zhao Yuanming. She turned six just this year.

Little Yuanming's father is a Falun Dafa practitioner named Zhao Yougang, also called Zhao Jianshe. He is 32 years old. In 2001, because he persisted in practicing Falun Dafa, the Weifang City government forced him to leave his job and his home in order to avoid being arrested under the unconstitutional ban on Falun Gong. Even so, in June of 2003 Zhao Yougang was arrested by the Nanjing police while he was composing materials to tell people about Falun Gong. In jail he has been constantly subjected to inhumane torture. On December 29, 2003, Zhao was illegally sentenced to nine years in prison. He is now being detained in Wuxi Prison and is suffering brutal treatment. To protest the persecution, Zhao has been on a hunger strike since June, the time of his arrest. Zhao is being painfully force-fed seven to eight times every night by the prison guards. Currently he is so extremely weak that he cannot stand upright by himself. Before, he weighed 85 kg (187 lb), but now his weight is reduced to only 35 kg (77 lb). Zhao is 1.75 m (5 ft 6 in) tall.

Yuanming's mother passed away from illness when Yuanming was only three months old. Yuanming is being raised by both sets of grandparents.

Zhao Yougang misses his daughter very much. During the time he was homeless, he frequently traveled back home for a quick glimpse of his daughter. Each time little Yuanming saw her father, she was overjoyed.

Little Yuanming went to Wuxi Prison hospital with her maternal grandmother to see her dad, who has become now virtually unrecognizable due to the torture. Seeing her now-emaciated and profoundly altered father, little Yuanming became so bewildered that she could only stare at him wide-eyed. Even though Yuanming is young, she can still understand, "I have already lost my mommy, I cannot lose my daddy."

Compassionate people, your letters and phone calls can help to stop this evil persecution and let little Yuanming return to the care of the father who loves her so much.