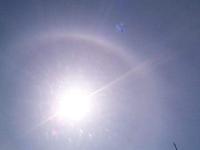 Yesterday (June 9, 2001) at around 11 a.m., when Falun Dafa practitioners in Toronto were busy decorating the meeting hall for the conference in the afternoon, some practitioners suddenly saw a colorful circle around the sun in the cloudless sky. The circle gradually disappeared after the conference ended.

This splendid phenomenon also appeared on May 13 when Dafa practitioners celebrated "Truthfulness-Benevolence-Forbearance Day" in front of Toronto's City Hall, and the whole scene lasted about 4 hours.

The writer of this article happened to record a dialogue between a couple on the square at Toronto's City Hall on May 13:

Husband, pointing to the ring in the sky and saying to his wife: "Look, there's a big circle in the sky, and someone said it's a Falun."

Wife: (pleasantly surprised) "Wow, it is!"

Husband: "They say it's a Falun, but I still think it's some physical phenomenon."

Wife: "Hey, don't say that. It's not good for you to not believe in anything. Why then didn't this 'physical phenomenon' choose to appear earlier or later, instead of just today?"

If this gentleman had seen the colorful circle embracing the sun yesterday, what would he have thought this time? Would it be another "physical phenomenon"? But why did it only appear during two big Falun Gong events?

Teacher Li Hongzhi wrote in "Lunyu" (the forward to Mr. Li's main books) that: "As for phenomena that are intangible and invisible in our dimension, but objectively exist and are reflected into our physical dimension as concrete manifestations, people dare not approach them, dismissing them as unknown phenomena. Opinionated people groundlessly try to reason that they are natural phenomena, while those with ulterior motives, against their own conscience, simply label all of them as superstition. Those who are indifferent simply stay away from the issue with the excuse that science is not yet advanced enough. If human beings are able to take a fresh look at themselves as well as the universe and change their rigid mentalities, humankind will make a leap forward. The Buddha Fa enables humankind to understand the immeasurable and boundless world. Throughout the ages, only the Buddha Fa has been able to perfectly provide a clear exposition of humanity, every dimension of material existence, life, and the entire universe."

“Bayan County, Heilongjiang Province: Letter from an Imprisoned Practitioner to His Wife”