(Minghui.org) The 2023 Chinese New Year falls on January 22 and many people know it is the year of the Rabbit. Here we would like to discuss some interesting facts related to this.

The Chinese zodiac system has two main components, tian gan (Heavenly Stems) and di zhi (Earthly Branches). The 10 Heavenly Stems are related to the Five Elements, namely, jia and yi (wood), bing and di (fire), wu and ji (earth), geng and xin (metal), and ren and gui (water). The 12 Earthly Branches correspond to 12 animals, that is, zi (rat), chou (ox), yin (tiger), mao (rabbit), chen (dragon), si (snake), wu (horse), wei (goat), shen (monkey), you (rooster), xu (dog), and hai (pig). In addition, each stem or branch also belongs to yin or yang, with odd ones as yang and even ones as yin.

The year of 2023 is gui mao, 40th term in the cycle. With water from the Five Elements and rabbit from the corresponding animal, 2023 is also known as the year of Water Rabbit or Black Rabbit.

There are numerous proverbs related to the Year of Black Rabbit, such as “The black rabbit comes to give money, but even the ox cannot get up,” and“The black rabbit brings money, double springs would render wheat as firewood.”So, what do they mean?

Before answering that question, we need to take one step back and first understand the Chinese calendar. There are three types of calendars in this world: solar, lunar, and lunisolar. The solar calendar uses the position of the earth relative to the sun to define a year. Since the earth goes around the sun every 365.242199 days, 365 days is considered one year with a leap year in roughly every four years to make up the difference as in the current Western calendar.

Lunar calendar uses the cycle of the moon (or moon phases of new, full, and crescent) to define a month. Since each cycle has 29.5306 days, even with alternate 29 or 30 days a month, it is only 354.3672 days per 12 months. This is 10.875 days shorter than the solar year of 365.242199. Lunar calendar has its own benefits. For example, moon phases are known to be connected with the human physiology, psychology, and society. Due to its discrepancy with the definition of year (cycle of earth going around the sun), few countries adopt such strict lunar calendar due to inconvenience.

People in ancient China realized this dilemma and adopted a system of lunisolar calendar. Briefly, a year is still defined by the cycle of the earth going around the sun, and a month is defined by moon phases. Leap months are added as needed to address the discrepancy while maintaining a harmony of heaven, earth, and mankind.

The system of Heavenly Stems, Earthly Branches, and sexagenary cycle were determined during the Yellow Emperor’s era about 5,000 years ago. But more questions remained. With a difference of 10.875 days between the solar and lunar cycles, a leap month occurs about once every three years, or twice every five years as a rule of thumb. But which month should be added as an extra month?

This question is related to another component of the Chinese lunisolar calendar called jie qi (solar term). Basically, we know each year has four seasons (spring, summer, autumn, and winter) and there are different activities at various times, from clothing, food, agriculture, to many more. Is there a way to incorporate these into the calendar? The solution is jie qi (solar term).

Every year the earth travels around the sun in a circle of 360 degrees. It can be divided into 24 sections with 15 degrees in between. That means 6 solar term per season, or two solar terms per Western month. Specific terms are given for each period describing the time of the year, weather (both in the sky and on the earth), what to do on the land, and more for planning in the majority of areas of the Northern Hemisphere. 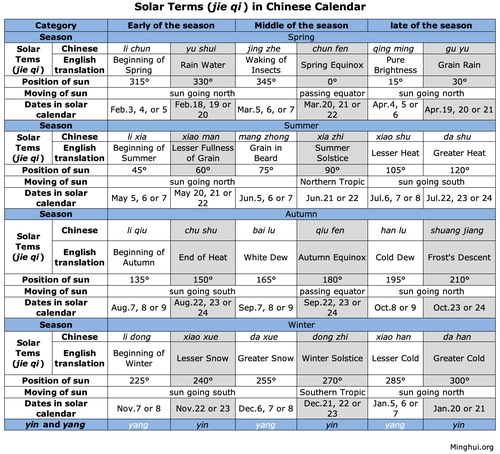 Despite its complexity, as seen in Table 2 above, the system of jie qi (solar term) was fully established 2,000 years ago during the Han Dynasty. As seen in Table 2, like many other things, each of the solar terms also belongs to yin or yang with odd ones as yang and even ones as yin. It was decided that, if a month only has a yang solar term but not the yin one, it would become a leap month added to the previous month.

For example, after the 2023 Chinese New Year on January 22 (Western solar calendar, same as below), it is li chun and gu yu Chinese January, as well as jing zhe and chun fen in Chinese February. But the following month only has qing ming, so it becomes leap month (that, leap Chinese February) before Chinese March starts.

There are various proverbs related to leap February. For example, “Double springs in leap February brings spring cold and autumn drought” and “With two springs in a year, the soil is viewed as gold.”

Di Mu Jing (Earth Mother Sutra) has the following description of the year of gui mao,“In the year of gui mao, there are mixed happiness and sadness; Plenty of rains and hail in spring and summer, followed by drought in autumn. Area of Yan and Zhao (northern China) has good growth of mulberry and hemp (for clothing), while land of Wu (downstream of Yangtze River) enjoys rice harvest.Many people are sick with livestock infested with plagues,and empty mulberry branches have no leaves for silkworms. Silkworm women are fussing around, holding their baskets in tears:harvest of silk from hard work ends up with little return in the end.”

Together with proverbs on the Year of Black Rabbit in the beginning of this article, it seems there are many uncertainties in the near future. It is true that many people – including Chinese citizens – are now wealthier than before, and even indulging themselves in material possessions.

But without adequate moral foundation, all the hard work could be in vain during disasters such as drought, cold, plagues, recessions, and others. Looking around in this world, one may find the brutality and lies from the Chinese Communist Party (CCP), the three-year-long pandemic, and the recent COVID tsunami in China could be warnings for much-needed reflection.

Across cultures, mankind has been pursuing health and happiness. However, short-term wealth does not necessarily translate to safety, prosperity, and long-term stability. Only by cherishing moral values, acting on our conscience, and rejecting totalitarian regimes like the CCP, can we carry on the thousands-of-years-long civilization and pass it on to future generations with no regrets.

““Can You Help Me Quit the Chinese Communist Party?””