(Minghui.org) Falun Dafa practitioners in Texas hosted free Falun Dafa nine-day lecture classes in Houston's Westchase district from August 27 to September 5, 2022. The participants were Americans, Chinese and Vietnamese, and each participant learned about the classes through different means. 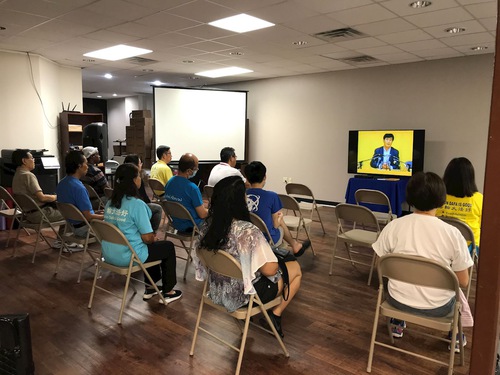 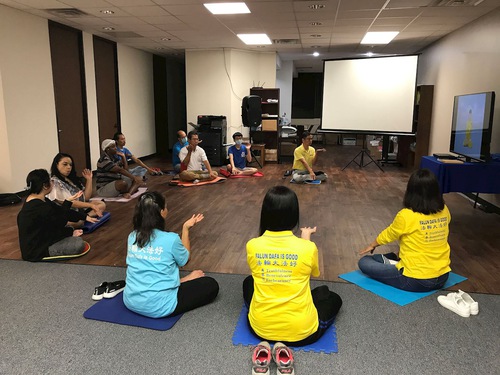 Falun Dafa practitioners played the nine-day lecture videos by Master Li Hongzhi, the founder of Falun Dafa, in Guangzhou, and then the video of Master teaching the exercises. The participants followed Master’s movements as they learned the practice. Veteran Falun Dafa practitioners helped to correct their movements when necessary. Despite this being the first time that these people had come into contact with Falun Dafa, they all persisted in attending all nine days of the class and benefited in many ways.

On the ninth day, after playing Master’s lecture and exercise teaching videos, the participants subsequently shared their experiences after learning the practice.

Caroline, a young lady, is a registered nurse. She learned about the nine-day lecture classes on the Internet. She said that after listening to Master’s first lecture and learning the exercises, she had a very good sleep. After persisting in attending all of the nine-day classes, Ms. Caroline had many reactions.

“Practicing the exercises indeed improved the quality of my sleep and my mental agility and acuity. My body felt light and became more agile. It no longer feels so lacking in energy or full of negative energy,” she said.

Caroline described how her body felt when she learned the exercises during the nine-day classes.

“I felt that my body had a different energy,” she said as she demonstrated the ‘holding the wheel’ position over her head. “I felt the Falun turning at my lower abdomen and chest area, especially when I did the holding the wheel above the head.”

She said that after practicing the exercises, the pain in her back, which started when she learned some self-defense movements, disappeared too.

A Chinese man named Alec had obtained a card promoting the nine-day classes at the Herman Park practice site. “I have been into Buddhism for more than 20 years and I often read The Epoch Times, I understand the truth about Falun Dafa,” he said.

“During the nine-day classes, Master’s Fa principles allowed me to understand that practicing the exercises can open up the energy channels in our body. Falun Dafa advocates cultivating one’s xinxing and Truthfulness, Compassion, and Forbearance are the principles for being a good person.”

He said that there are some Fa principles that he has yet to really understand, and so a Falun Dafa practitioner suggested that he read Zhuan Falun frequently to increase his understanding of the Fa.

Daniel, who is Vietnamese, attended the nine-day lectures with his son. He is an engineer and he saw a card promoting the nine-day classes outside a supermarket in Chinatown.

“I felt that everything was very good while I was attending the nine-day classes,” he said. “I felt that there was a lot of energy.”

“I heard that in China, the Chinese Communist Party (CCP) does not allow the Chinese people to practice Falun Dafa. I think that cultivating Falun Dafa is going to help me become a better person,” he said.

Daniel's son Erik is a student. Eric saw a card promoting the nine-day classes outside a supermarket in Chinatown, and he also read information about the classes online. “I used to have backaches and incorrect body posture,” he said. “After listening to the lectures and learning the exercises, my backache improved a lot and my energy has increased too.”

“Truthfulness, Compassion, and Forbearance guides us to live a life that is beneficial to our mind and body,” he said. “I am very happy. I had heard about Falun Dafa before.”

September 5, 2022, was Labor Day in the United States. A Falun Dafa practitioner gave every participant who attended the class the most precious gift: their own copy of Zhuan Falun. The practitioner wished each of them a purposeful turning point in their life and that they could gain fruitful returns from the classes.