(Minghui.org) The Knesset Channel, an Israeli public television channel focused on parliamentary (Knesset) issues, broadcast an interview on July 20 regarding the Chinese regime’s forced organ harvesting of prisoners of conscience.

Reporter Emmanuelle Elbaz-Phelps interviewed Jacob Lavee, Professor of Surgery at Tel Aviv University. Dr. Lavee is also founder of the Heart Transplantation Unit at the Sheba Medical Center and immediate past President of the Israel Transplantation Society. The interview was also aired on Kan 11, a state-owned Israeli television channel.

The Killing of Organ “Donors”

The interview also coincided with the 23rd anniversary of the start of the Chinese Communist Party’s (CCP) persecution of Falun Gong, on July 20, 1999. Falun Gong is a meditation system based on the principles of Truthfulness-Compassion-Forbearance. A great amount of evidence has shown that Falun Gong practitioners have become the principal victims of China’s state-sanctioned forced organ harvesting.

Lavee, with Matthew Robertson from Australia National University, co-authored a research article titled “Execution by organ procurement: Breaching the dead donor rule in China” published in American Journal of Transplantation. Robertson, who speaks fluent Chinese, and Lavee used computational text analysis and conducted a forensic review of a database with hundreds of thousands of papers written by organ transplant doctors in China.

“What we were specifically looking for in these articles is sentences that will show us whether the organ extraction, the removal of the heart, from the organ donor was performed after brain death as required in medicine and transplants,” explained Lavee.

More than 70 of the reviewed articles published over the course of 25 years clearly indicated that the authors (doctors) had failed to meet the brain death declaration (BDD) criterion before performing organ transplants, meaning that the donors died of organ extraction. In other words, these doctors killed the donors for their organs. 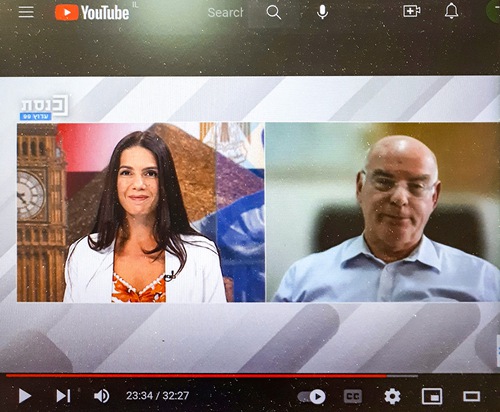 Interview with Jacob Lavee, Professor of Surgery at Tel Aviv University, on July 20, 2022

During the interview, Lavee said that the paper he and Robertson wrote included links to the Chinese medical articles they examined so that people could look into the research themselves. The Chinese doctors were apparently not even aware of the fact that their papers are written testimonies of their killing people.

Furthermore, the Chinese authorities announced that they had completely stopped using organs from death row prisoners starting in January 2015. If that was true and China really relied on voluntary organ donations, the number of organ transplantations would have dropped drastically since voluntary organ donation is very rare in China. But the number increased sharply instead, which brings the CCP’s reliabilty into question.

Regarding the source of the organs, Lavee referred to the judgment from the 2019 China Tribunal in London. Dozens of witnesses testified at the tribunal, providing ample evidence of the regime’s forced organ harvesting practice. “Forced organ harvesting has been committed for years throughout China on a significant scale and that Falun Gong practitioners have been one – and probably the main – source of organ supply,” concluded the Tribunal in June 2019.

That is why Lavee and his colleagues worked with the Israeli Ministry of Health, and in 2008 implemented an organ transplant law to ban Israeli citizens from traveling to China for the purpose of procurring an organ transplant (known as “transplant tourism”). When he was President of the Israel Transplantation Society, Lavee organized a conference on organ harvesting and invited speakers that included Canadian human rights lawyer David Matas to talk about how to end the forced organ harvesting in China. The Chinese Embassy attempted to pressure the Ministry of Foreign Affairs to stop Matas from attending the conference, but was unsuccessful. Lavee suggested that the Embassy send a representative to attend the conference. Someone from the embassy did come, and claimed the conference was “anti-CCP.” But the audience soon asked the representative to leave.

Lavee first heard about the organ harvesting in China in 2005. A patient of his had been waiting for a heart transplant for a year. Instead of continuing to wait, however, he went to China where he secured a heart in three weeks, paid for by his insurance company. He was guaranteed a particular date and time for receiving the transplant. Lavee said it would not be possible in Israel to guarantee that a suitable donor would die at a specific date, but the patient indeed returned to Israel from China with a new heart as promised. Because of this experience, Lavee started doing research into organ transplantation in China and uncovered this frightening, systematic organ harvesting system.

Lavee started publishing his research results in 2006 and also gave many interviews. He once received a phone call from an Israeli lawyer, who introduced himself as a representative of a pro-China organization. The lawyer demanded that Lavee stop doing research into China’s organ harvesting. Lavee contacted the legal office of the Department of Health and the lawyer never contacted him again.

“A Christian Understands the Facts About Falun Dafa”