(Minghui.org) Falun Dafa practitioners participated in a multicultural summer festival held in Koblenz, Germany on July 1, for the first time. They demonstrated the Falun Dafa exercises and performed a traditional Chinese dragon dance on stage. Their participation was welcomed by the mayor Ulrike Mohrs, Member of Parliament Josef Oster, and festival attendees.

Koblenz has long history and is located on the Rhine River. The multicultural summer festival has been held for many years. People of all ethnic groups enhance mutual understanding by presenting their cultures and promoting the integration of immigrants into German society. This year’s festival was held in a nearly two-hundred-year-old castle, and more than a dozen ethnic groups were invited to display their cultures on stage. 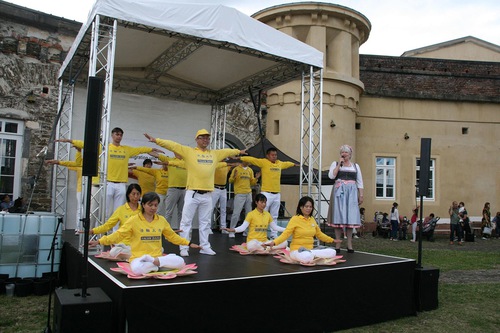 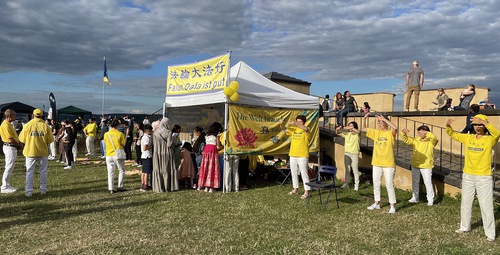 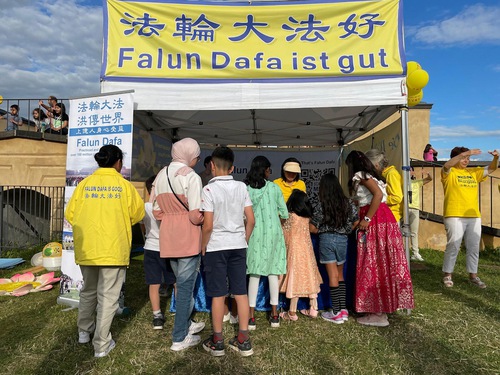 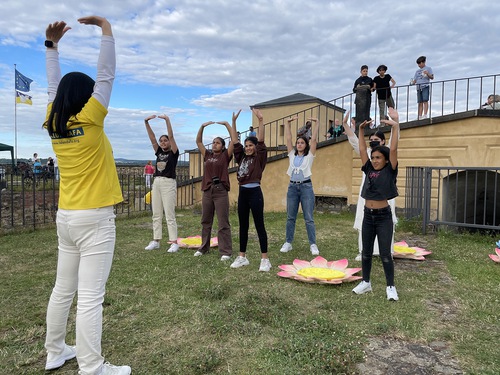 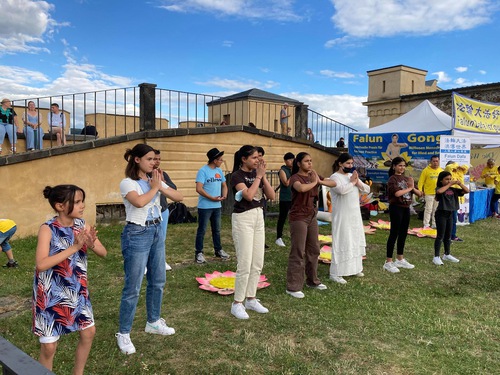 Mayor of Koblenz Agrees with the Principle of Truthfulness-Compassion-Forbearance 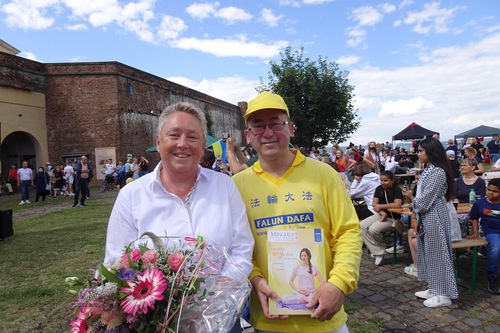 Mayor Ulrike Mohrs has her photo taken with a practitioner.

Mayor Ulrike Mohrs went to the Falun Dafa booth and a practitioner told her about Falun Dafa and its principles of Truthfulness-Compassion-Forbearance. He also explained how the Chinese Communist Party (CCP) began persecuting Falun Dafa in 1999.

Mayor Mohrs said, “Germany has basic laws and we provide protection for those who qualify, which is good. No matter who they are or where they come from, they will be treated fairly. We certainly support human rights. 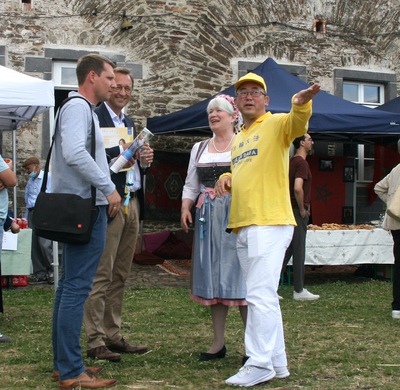 Josef Oster (second from left), Member of Parliament, talks with a practitioner.

Josef Oster, Member of Parliament, was on hand to receive information about Falun Dafa.

Practitioner Guo narrated his experience of being detained and persecuted in China for his belief. He also described how he worked hard to learn German and taught the Falun Dafa exercises in a local hospital after he came to Germany. He explained that he benefited both physically and mentally from practicing Falun Dafa so he wanted to share it with others.

Another practitioner briefly described Falun Dafa’s principles of Truthfulness-Compassion-Forbearance and explained to Mr. Oster how when one loses his temper, in fact he himself is hurt.

Mr. Oster who is a Member of Parliament of the Christian Democratic Union (CDU) agreed. He immediately said to his staff, “Did you hear that? The next time I lose my temper please remind me.” Everyone laughed. He happily accepted a little lotus flower which had the words, “Truthfulness-Compassion-Forbearance.”

Mr. Contento expressed his special thanks to practitioners for participating and said, “It’s really good that you are here today. We have been hosting this event for years, and this is the first time you have participated in this event. I think it’s great. Your participation enriches our event and our city.” 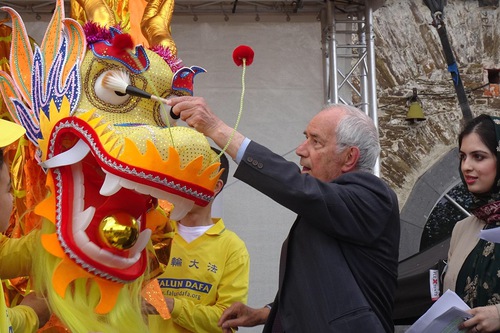 Vito Contento, the organizer of the event and the chairman of the city’s Immigration and Integration Advisory Committee, applies the finishing touch. 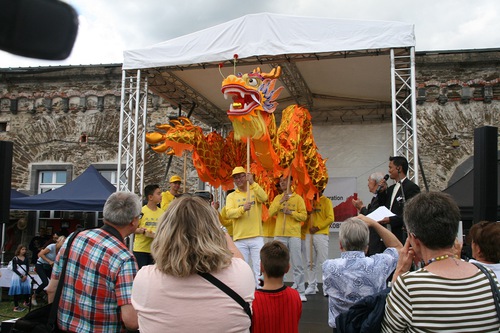 Dragon springs to life after the finishing touch. 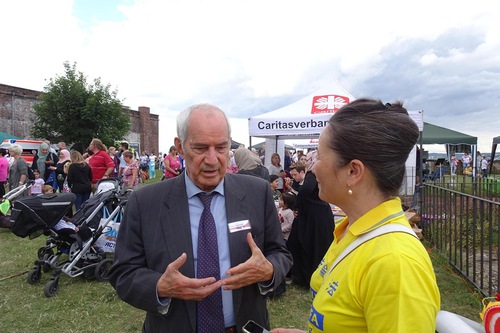 Mr. Contento talks with a practitioner

Learning about the Persecution of Falun Gong in China

During the celebration many people also learned about the CCP’s persecution of Falun Dafa, and signed a petition to condemn organ harvesting from practitioners while they are still alive. 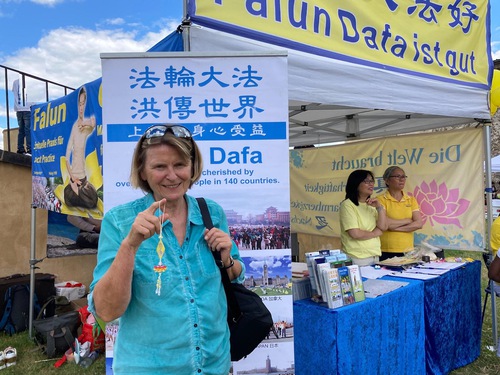 Beate Glöckner, a recently retired former social affairs consultant, signed the petition after learning about the CCP’s persecution. She strongly agreed with Falun Dafa’s principles of Truthfulness-Compassion-Forbearance, “This is what everyone needs to do, maintain peace, oppose violence, and have a good influence on the environment around them.”

She watched as practitioners demonstrated the exercises. She said that it was amazing that they could concentrate in the noisy environment. She felt Falun Dafa was very good and said she planned to learn more about it.

Mr. Linster, a retired former member of Social Affairs Association, said, “A friend suggested I come here. What happens in China (persecuting good people) is not right. An authoritarian regime controls so much. I absolutely don’t agree with this.”

He said it was good that practitioners were telling people about the persecution, “I think it is very good to take a stand on this topic and clarify the truth to everyone.”

Steffi went to the Falun Dafa booth after watching the exercise demonstration on stage. She is a medical care teacher, and there are often Chinese students in her school. She said, “The practice feels peaceful and relaxing. I am very interested in it, so I came here.”

After she heard about the CCP’s persecution of Falun Dafa and the organ harvesting in China, she immediately signed the petition and said, “I think it’s terrible. I will pay more attention to it.” 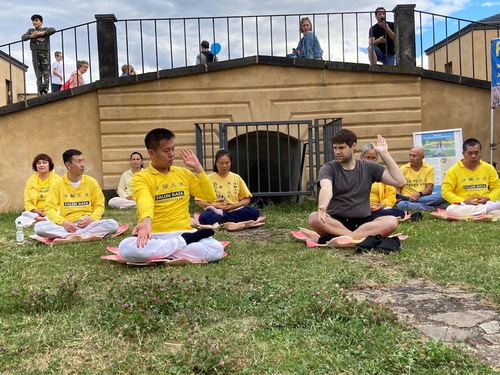 Corbin, a young computer engineer, said after learning the fifth exercise, “I feel relaxed. I know that Falun Dafa teaches the principles of Truthfulness-Compassion-Forbearance. These are very good values and can help everyone.”

He said he heard about the persecution of Falun Dafa in China. “Different cultures, groups and individuals are suppressed and killed. This is a modern-day tragedy. Many people are forced to flee to the United States or Canada.” 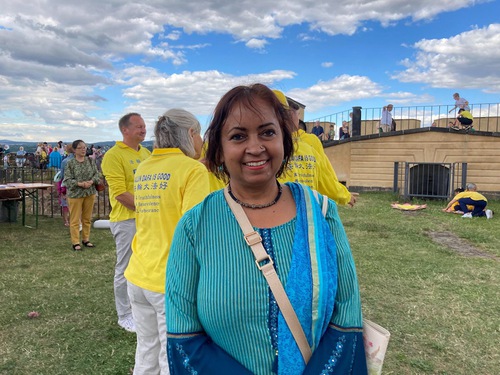 Members of a local Indian community organization were interested in learning more about Falun Dafa. The vice-chairman of the association said, “After a busy work day, one calms down and meditates for ten minutes. It is refreshing and helpful in maintaining a peaceful mind. I don’t understand why meditation is forbidden in China. This shouldn’t happen.”

Ms. Shobha Gaur-Krämer, a yoga teacher, said she noticed the practitioners wearing bright yellow clothes from a distance. She said she felt their benevolence and was attracted to their booth. She said, “Truthfulness-Compassion-Forbearance are very important. They are the opposite of money, tension and pressure. These principles are very important today.

“I am grateful that you took the time to come here today and show these values to the world.” She said she reads various reports and knew about the CCP’s persecution of Falun Dafa and organ harvesting. She said, “Harsh rule is not a long-term solution. It should be done through benevolence.” 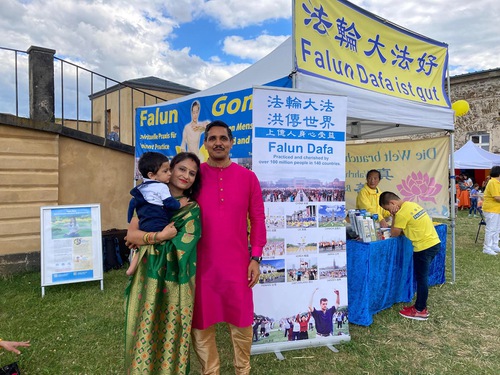 Piyush Singh and his wife

Piyush Singh, his wife and child stopped by the Falun Dafa booth and watched as practitioners did the second exercise. He said, “Seeing that they can hold their position for such a long time, one can imagine that they are physically and mentally stable and have good concentration. I really like this practice.”

“I see that you do not protest with force, but peacefully expose the real problem. This is a good way. People should pay more attention to it and learn more about the truth.” 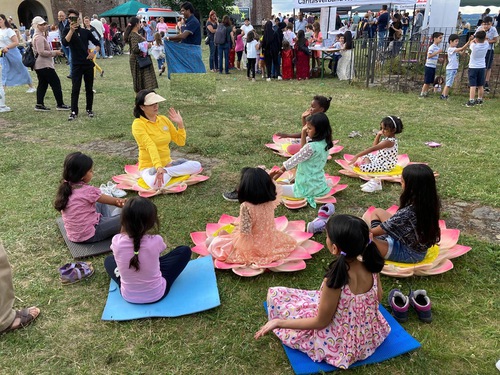 An Indian mother was happy watching her young daughter learning to meditate, “I’m surprised. She can’t sit still at home. She doesn’t want to leave here (learning to meditate). I’m sure I will try this exercise with her. I have seen it online and heard about it from friends.”

She felt Truthfulness-Compassion-Forbearance are good and said, “Forbearance is important and needs to be learned by both children and adults.”

“Memorizing the Teachings Enlightened Me to the Consequences of Fraud”