Falun Dafa practitioners held a rally and march in Washington D.C. on July 21 to condemn the Chinese Communist Party’s (CCP) 23-year-long persecution. They also called for the brutality to end.

Before the rally, more than twelve U.S. senators and congressmen sent letters to the Falun Dafa Association, which hosted the rally, expressing their solidarity with them. They condemned the CCP’s persecution and the organ harvesting atrocities. 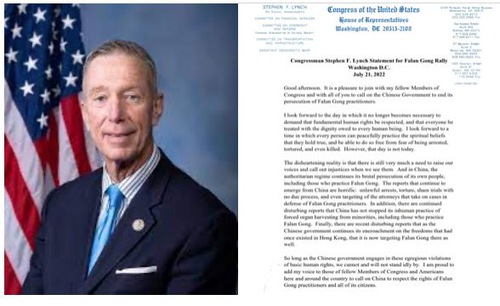 Congressman Stephen Lynch and his statement to support Falun Gong.

Congressman Stephen Lynch of Massachusetts stated, “It is a pleasure to join with my fellow Members of Congress and with all of you to call on the Chinese Government to end its persecution of Falun Gong practitioners.”

He stated, “I look forward to the day in which it no longer becomes necessary to demand that fundamental human rights be respected, and that everyone be treated with the dignity owed to every human being. I look forward to a time in which every person can peacefully practice the spiritual beliefs that they hold true, and be able to do so free from fear of being arrested, tortured, and even killed.”

He stated that, “As long as the Chinese government engages in these egregious violations of basic human rights, we cannot and will not stand idly by.” 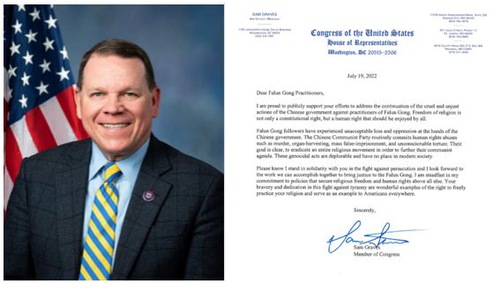 Rep. Sam Graves and his letter

Rep. Sam Graves stated in his letter, “I am proud to publicly support your efforts to address the continuation of the cruel and unjust actions of the Chinese government against practitioners of Falun Gong, Freedom of religion is not only a constitutional right, but a human right that should be enjoyed by all.

“Falun Gong followers have experienced unacceptable loss and oppression at the hands of the Chinese government. The Chinese Communist Party routinely commits human rights abuses such as murder, organ-harvesting, mass false-imprisonment, and unconscionable torture. Their goal is clear, to eradicate an entire religious movement in order to further their communist agenda. These genocidal acts are deplorable and have no place in modern society.

“Please know I stand in solidarity with you in the fight against persecution and I look forward to the work we can accomplish together to bring justice to the Falun Gong. I am steadfast in my commitment to policies that secure religious freedom and human rights above all else. Your bravery and dedication in this fight against tyranny are wonderful examples of the right to freely practice your religion and serve as an example to Americans everywhere.” 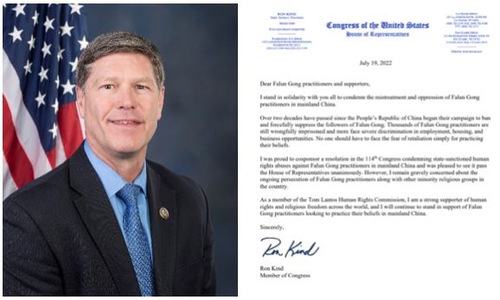 Rep. Ron Kind for Wisconsin and his letter

Rep. Ron Kind stated in his letter, “I stand in solidarity with you all to condemn the mistreatment and oppression of Falun Gong practitioners in mainland China.

“Over two decades have passed since the People’s Republic of China began their campaign to ban and forcefully suppress the followers of Falun Gong. Thousands of Falun Gong practitioners are still wrongfully imprisoned and more face severe discrimination in employment, housing, and business opportunities. No one should have to face the fear of retaliation simply for practicing their beliefs.”

“I was proud to cosponsor a resolution in the 114th Congress condemning state-sanctioned human rights abuses against Falun Gong practitioners in mainland China and was pleased to see it pass the House of Representatives unanimously. However, I remain gravely concerned about the ongoing persecution of Falun Gong practitioners along with other minority religious groups in the country.”

“As a member of the Tom Lantos Human Rights Commission, I am a strong supporter of human rights and religious freedom across the world, and I will continue to stand in support of Falun Gong practitioners looking to practice their beliefs in mainland China.” 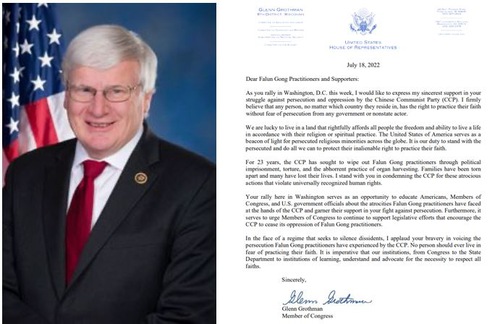 Rep. Glenn Grothman for Wisconsin and his letter

Rep. Glenn Grothman stated in his letter, “As you rally in Washington D.C. this week, I would like to express my sincere support in your struggle against persecution and oppression by the Chinese Communist Party (CCP). I firmly believe that any person, no matter which country they reside in, has the right to practice their faith without fear of persecution from any government or nonstate actor.”

“We are lucky to live in a land that rightfully affords all people the freedom and ability to live a life in accordance with their religion or spiritual practice. The United States of America serves as a beacon of light for persecuted religious minorities across the globe. It is our duty to stand with the persecuted and do all we can to protect their inalienable right to practice their faith.

“For 23 years, the CCP has sought to wipe out Falun Gong practitioners through political imprisonment, torture, and the abhorrent practice of organ harvesting. Families have been torn apart and many have lost their lives. I stand with you in condemning the CCP for these atrocious actions that violate universally recognized human rights.”

“In the face of a regime that seeks to silence dissidents, I applaud your bravery in voicing the persecution Falun Gong practitioners have experienced by the CCP. No person should ever live in fear of practicing their faith. It is imperative that our institutions, from Congress to the State Department to institutions of learning, understand and advocate for the necessity to respect all faiths.” 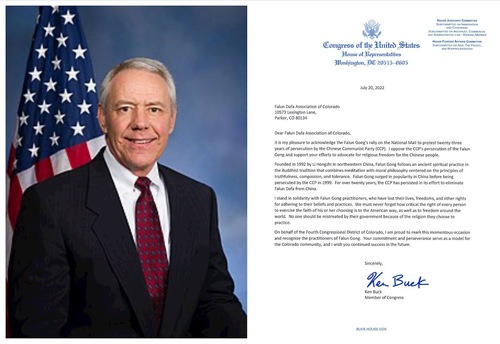 Rep. Ken Buck of Colorado and his letter

Rep. Ken Buck stated in his letter, “It is my pleasure to acknowledge the Falun Gong’s rally on the National Mall to protest twenty-three years of persecution by the Chinese Communist Party (CCP). I oppose the CCP’s persecution of the Falun Gong and support your efforts to advocate for religious freedom for the Chinese people.”

“I stand in solidarity with Falun Gong practitioners, who have lost their lives, freedoms, and other rights for adhering to their beliefs and practices. We must never forget how critical the right of every person to exercise the faith of his or her choosing is to the American way, as well as to freedom around the world. No one should be mistreated by their government because of the religion they choose to practice.” 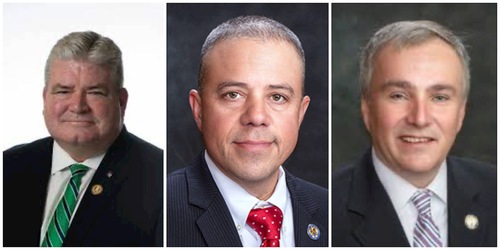 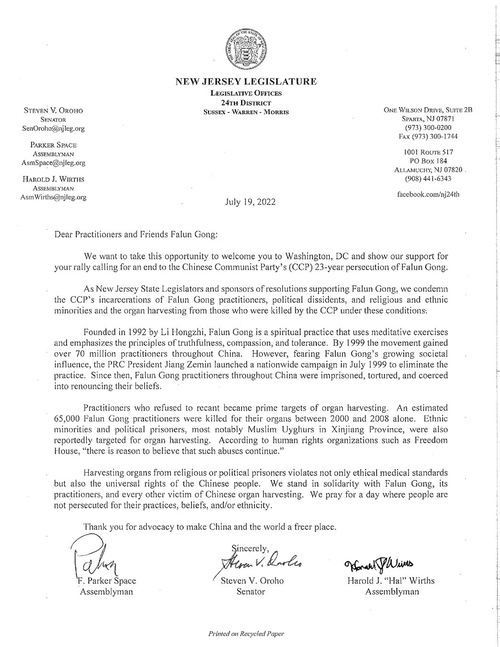 New Jersey State Senator Steve Oroho, Assemblyman F. Parker Space, and Assemblyman Harold Wirths stated in their letter, “As New Jersey State Legislators and sponsors of resolution supporting Falun Gong, we condemn the CCP’s incarceration of Falun Gong practitioners, political dissidents, and religious and ethnic minorities and the organ harvesting from those who were killed by the CCP under these conditions.”

“Harvesting organs from religious or political prisoners violates not only ethical medical standards but also the universal rights of the Chinese people. We stand in solidarity with Falun Gong, its practitioners, and every other victim of Chinese organ harvesting. We pray for a day where people are not persecuted for their practices, beliefs, and/or ethnicity.”