(Minghui.org) With the persecution of Falun Gong still going on after 23 years, the U.S. Congressional-Executive Commission on China (CECC) tweeted on July 20, 2022 to call on the Chinese Communist Party (CCP) to stop the persecution and release all incarcerated practitioners.

The CECC tweet read, “For the past 23 years, the Chinese gov’t has committed appalling human rights abuses against practitioners of Falun Gong in an effort to eradicate the practice. These abuses must end and all prisoners released. We urge the UN to fully investigate ongoing atrocities in China.”

In another tweet, the CECC demanded the CCP immediately release Ms. Xu Na, Ms. Deng Cuiping and Mr. Bian Lichao, as well all other detained practitioners, including those in their searchable Political Prisoners Database. 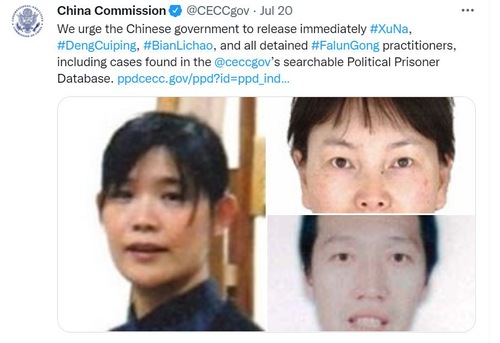 Ms. Xu is a renowned artist in Beijing. Because of her faith in Falun Gong, she has been arrested and detained many times. For providing shelter to other practitioners in 2001, she was sentenced to five years. Her husband, Mr. Yu Zhou, was tortured to death months before the 2008 Beijing Olympics. Her latest arrest took place on July 19, 2020. She was sentenced to eight years on January 14, 2022, weeks before the Winter Olympics in Beijing.

Mr. Bian Lichao, a former middle school teacher in Tangshan City, Hebei Province, was sentenced to 12 years in 2012. His wife and daughter were both targeted for trying to rescue him. His wife, Ms. Zhou Xiuzhen, also a former teacher, was sentenced to four years in August 2015. She developed a liver condition while in custody and passed away shortly after being released.