Home > Karma & Virtue > Voices of Support Worldwide
Elected Officials in Switzerland Call for an End to the 23-year-long Persecution of Falun Gong
July 20, 2022 | By a Falun Gong practitioner in Switzerland

(Minghui.org) On July 14, 2022, Falun Gong practitioners held a peaceful rally outside of the office of the United Nations High Commissioner for Human Rights in Geneva, Switzerland, calling on the international community and the Swiss government to help stop the persecution of this ancient spiritual discipline by the Chinese Communist Party (CCP). 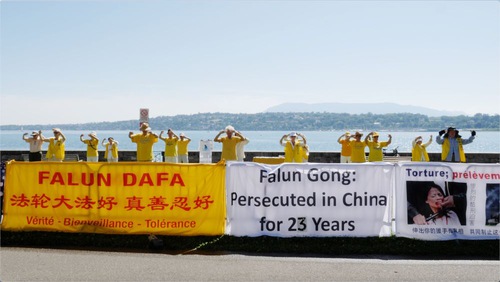 Falun Gong practitioners in Switzerland held a rally, calling for the end of the 23-year-long persecution in China.

Three members of the Canton of Geneva and a former member of the Federal Assembly (now a city councilor) attended the event in person, despite the heat. Another eleven members of the federal assembly, the cantonal assembly, and the l’ACAT-Suisse (a Christian organization focused on spreading awareness of torture and the death penalty worldwide), sent letters of support prior to the event.

Patrick Dimier, a member of the Grand Council of the Canton of Geneva, expressed regret that after 23 years, the persecution continues and the evil is shameless.

“The persecution affects first and foremost those who want to bring beauty, peace, and love to others, which is no longer acceptable. But what is even more unacceptable is how many of the countries that claim to be democratic remain silent in front of the atrocity.”

“I appreciate Falun Gong for the simple reason that it is peaceful and promotes love and respect for others. As long as we respect and love each other, the differences we have between us are nothing.” 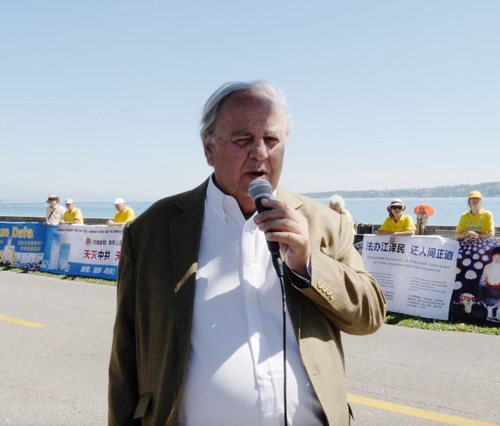 Patrick Dimier, a member of the Grand Council of the Canton of Geneva

He thanked the practitioners for their persistence over the years and he said in Chinese, “Falun Dafa hao! (Falun Dafa is good!)”

Yannick Maury, a member of the Grand Council of the Canton of Vaud, remarked, “Human rights are universal. As rights-bearing citizens, we must morally support our brothers and sisters in all corners of the globe. We must fully support Falun Gong practitioners, who have been persecuted by the Chinese communist authorities in a despicable and unacceptable manner for twenty-three years.” 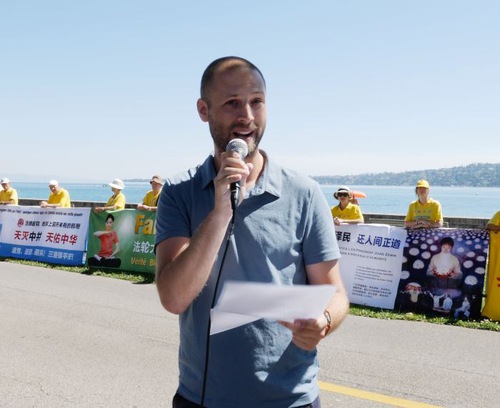 Yannick Maury, a member of the Grand Council of the Canton of Vaud

Maury added, “We must ask the Swiss federal and cantonal authorities to do everything within their power to take all the action they can to make China stop this persecution and stop harvesting the organs of Falun Gong practitioners. Falun Gong practitioners simply want to live their lives following the principles of Truthfulness, Compassion, and Forbearance, which are the very values that make up our democratic institutions and Switzerland.”

He said in the end, “We encourage you to speak out and make everyone aware of this vicious persecution and to use all channels and avenues to work with Swiss elected officials to stop this persecution and stop transplant tourism, which unfortunately makes organ recipients complicit in these crimes. [All this is] for the sake of Falun Gong practitioners, for the sake of the victims of the Chinese communist government, and for the sake of human rights!”

“We Will Not Tolerate This Cruel and Humiliating Persecution”

Emmanuel Deonna, member of the Grand Council of the Canton of Geneva, said, “Human rights are universal, indivisible, and cannot be denied. We are here before the Office of the United Nations High Commissioner for Human Rights, in the city of human rights, the international capital of human rights. It’s home to numerous international governmental and non-governmental organizations. We are keeping in our thoughts all our persecuted Chinese friends, Falun Dafa practitioners, the Uyghurs, and the Tibetans, which are persecuted by the Chinese Communist Party.” 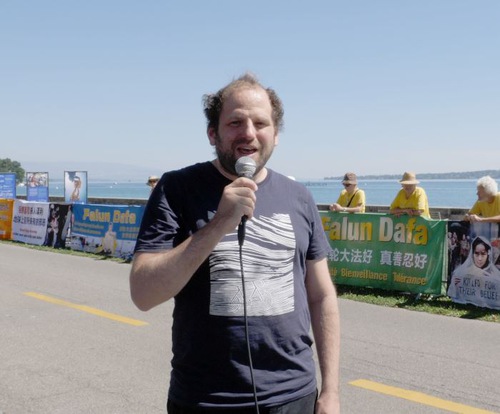 Emmanuel Deonna, member of the Grand Council of the Canton of Geneva

He added, “As human rights-conscious citizens of the world, we will not tolerate this cruel and humiliating persecution. We will continue to fight relentlessly to denounce them. Falun Dafa practitioners are seeking for a better world every day by spreading their belief in Truthfulness, Compassion, and Forbearance. I thank you and encourage you to continue this essential and important fight.”

“The Resistance Must Continue and Persist”

Luc Barthassat, a former member of the Swiss Federal Assembly, former member of the Cantonal Council of Geneva, and current Geneva City Councilor, said, “Today, we must not only support each other, but also must not forget to hold our ground and remind our government from the municipal level, especially in Geneva, which calls itself a cosmopolitan city and plays the role of an international window. Geneva, where the major institutions are at our doorstep, we must also go and knock on those doors, and if no one answers us, we may have to knock a little harder.” 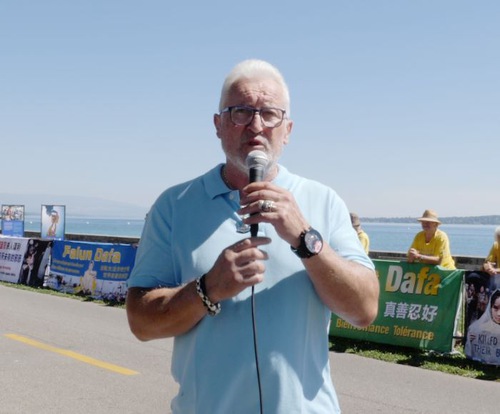 Luc Barthassat, a former member of the Swiss Federal Assembly

“Today marks 23 years of persecution, and the resistance must continue and persist.” Balthasar said, “Today, let us remain hopeful, stand firm, knock on all possible and unimaginable doors, and remember that the most important thing is to seek answers to the problems.”

After the speeches, the practitioners read support letters.

Carlo Sommaruga, a member of the Senate of the Federal Assembly, said in the letter, “It is important to take action to defend freedom of speech and belief in China and at the same time we must resist the CCP’s repression and despicable practices, actions against Falun Gong believers and other ethnic or religious groups.”

Christian Dandrès, a member of the parliament, said in the letter, “The Chinese regime has carried out unbelievable repression and violence against all the people it believes will threaten or oppose its dictatorship. It is a basic obligation to support you (Falun Gong) and to stand up against this despicable persecution. It’s upholding human rights in China and democracy, and is also related to whether we can enjoy peace and human dignity in other parts of the world.”

Youniss Mussa, a member of the Geneva State Assembly, wrote, “I would like to express my full support and admiration for the courage you have shown in the fight against the brutal persecution of the Chinese communist regime. It is imperative to condemn and expose the persecution and crimes against Falun Gong practitioners. For a long time, these atrocities were not known by the world. But through your efforts, we all became aware about this matter.”

Other elected officials who sent support letters to the practitioners include: