(Minghui.org) As a Euronews journalist in Afghanistan, Maryam Shahi experienced many dangerous situations. Although she was not physically injured by the explosions and gunfire around her, she was psychologically traumatized for years. To compound her stress, when the COVID pandemic arrived, she had flu-like symptoms for three months.

During those most difficult days Maryam heard about Falun Dafa from a video circulated on social media. The story of a person’s miraculous recovery from COVID made her curious about the practice. “I was so inspired by the story,” she recalled. “It was as if at the end of life, I saw a door to a new future.”

Shortly after Maryam began to practice Falun Dafa, her friends noticed her positive changes. “My complexion looked fresher and younger and my face no longer looked as tired and nervous as it used to. What my friends didn’t know was that my intense grief was gone,” she recalled. “In a world I felt was coming to an end, suddenly a door was opened. I experienced real happiness.”

“If the human race is able to improve its character, conduct, and thinking by grounding these in moral values, it will be possible for civilization to endure and even for miracles to occur again in the human world.” (“On Dafa,” Zhuan Falun)

Her view of the world changed. When walking out of the house, she no longer only saw the dusty streets and dark skies. Suddenly, the streets, trees, shops and passers-by seemed increasingly brighter. “Everything looked beautiful and invigorating to me. It was as if my surroundings had taken on a new life,” she explained.

Impressed by her new, positive outlook, some of Maryam’s friends also wanted to practice Falun Dafa. Two close friends have already started practicing cultivation. “One of them had unsuccessfully tried fertility treatments for years. Her problem was resolved shortly after she started practicing,” she said.

“A close friend also practiced Falun Dafa and my sister and I lived with her until the Taliban came to power in Afghanistan. During the first, second and third COVID outbreaks, my practitioner friend and I did not get infected,” she said. Even though Maryam’s sister did not practice, she was blessed by Falun Dafa, and did not get the virus either.

“During that time I learned that a friend I’d known for several years was a Falun Dafa practitioner. So, she helped me and my friend join the online group study,” she said. 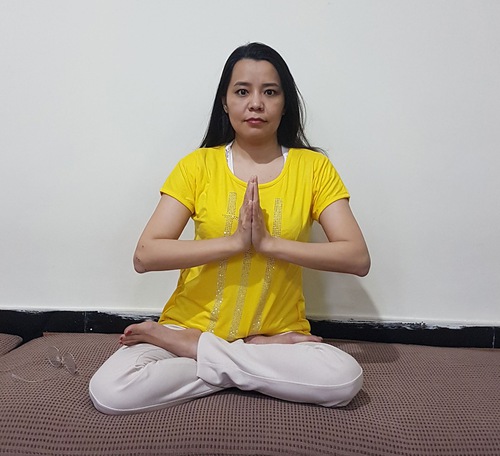 Maryam Shahi is thankful for the benefits and protection she’s received from Falun Dafa.

Being a Falun Dafa practitioner means aligning oneself with the principles of Truthfulness-Compassion-Forbearance to be a better person. “After starting cultivation, I realized that contrary to my previous ideas, I had many attachments that I wanted to give up,” she explained. So she began to work on identifying and eliminating each one.

She also had some interesting experiences. “One night I found myself in a car and the driver was taking me to another world. A young girl sat next to me. I did not recognize her and asked, ‘Who are you?’ She replied, ‘I have been waiting twenty years to practice Dafa,’” Maryam said.

She did not know that moving from one dimension to another was so easy. Then she saw a very young man with the face of a Chinese Buddha wearing a jade-colored Buddhist robe that monetarily changed to pink. “I thought he must be our teacher Mr. Li Hongzhi. Master guided the girl and me to another world, where many Dafa disciples were standing at different heights on a mountain. Some, like me, were not on the heights and were standing on the ground,” she continued. “Dafa disciples could easily communicate with telepathy from any height on the mountain on which they stood. Although we were a large crowd, without the need for speakers or sound equipment, we could talk to each other.”

Maryam felt that this was encouragement. “My impression was that Master accepted me as His student,” she explained. “Today I understand that to become a Dafa practitioner, one is extremely fortunate and has serious responsibilities.” 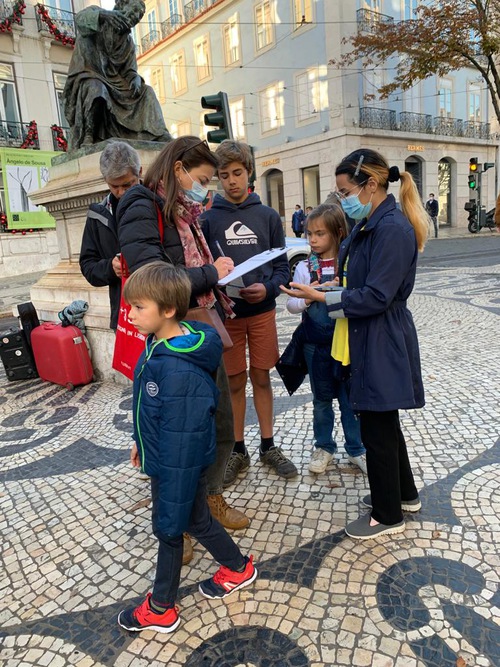 While in Portugal, Maryam (first on right) helped tell people about Falun Dafa.

Due to the political turmoil in Afghanistan, Maryam decided to leave in August 2021. At that time, the Spanish Embassy sent some troops to the Abby Gate of Kabul Airport to bring her, her sister and her friend into the airport. “The crowd and pressure were too much. The Spanish Embassy asked us to wear red and yellow scarves and coats so they could identify us. I also sent a photo of ourselves standing in the crowd to let the Spanish soldiers know where we were,” she recalled.

Maryam remembered that the media director who was following her departure from Afghanistan had advised them to stand by the wall so that the soldiers could easily reach them. “Fortunately, at the same time we were shoved from the middle of the crowd to the corner of the wall when the crowd pressure increased,” she wrote. “There were so many people that we could not see our feet.”

Suddenly, an explosion erupted in the crowd with many people killed and wounded, perhaps hundreds. “The stronger people trampled on the weaker people to escape, while we took refuge one meter away from the explosion next to the wall,” she wrote, “We watched that horrible scene. Bodies were floating in the sewers, and hundreds of corpses filled the sidewalk. The dying and wounded were moaning.”

The departure plan through Kabul Airport was thus completely canceled. “As we returned home a few steps from death, I thought that death had been chasing me for many years, but did not succeed,” Maryam continued. “I now realize that I was saved by Master over and over again.”

With the media director’s help, the plan changed to entering Iran through the land border. During the two weeks she stayed at her father’s place in Iran, Maryam shared her experiences after she began practicing Falun Dafa and the blessings she received. “I showed a video introducing Falun Dafa to my mother and my eldest sister. One of my brothers, my youngest sister, and my eldest sister became interested in practicing and read Zhuan Falun,” she said.

In September 2021, the three of them successfully arrived in Portugal. Maryam is very thankful to Master for his help. Looking back to those dangerous days, she could not help but wonder why she was not killed.

“Was my blood more important than the people who were sacrificed? Or did they not have a higher being to watch over them or to hear their voices?” she asks. One morning after waking up, she noticed that a scorpion was next to her pillow but she was not harmed. “From that experience, in those days of bewilderment I came to the conclusion that Master sees our thoughts. My story is a sign that life and death are a matter of destiny,” she said.

I remember what Master said,

“If you truly follow the righteous way in cultivation practice, nobody will dare to do something to you at will. Besides, you have the protection of my fashen, and you will not be in any danger.”

“What is owed must be paid for. Therefore, some dangerous things may occur in the course of cultivation practice. When these things take place, however, you will not be scared, and neither will real danger be allowed to happen to you.” (Lecture Three, Zhuan Falun)

“During the years before and after I began to practice Falun Dafa, I was steps from death many times,” she said, “If it were not for Master’s protection, I would not be alive today.”

Latest Podcast
Podcast (Cultivation): “Grateful for Opportunities to Walk My Cultivation Path Well While Participating in a Film Project”
- Jun 06, 2022