(Minghui.org) As a Euronews journalist in Afghanistan, Maryam Shahi experienced many dangerous situations. Although she was not physically injured by the explosions and gunfire around her, she was psychologically traumatized for years. To compound her stress, when the COVID pandemic arrived, she had flu-like symptoms for three months.

During those most difficult days Maryam heard about Falun Dafa from a video circulated on social media. The story of a person’s miraculous recovery from COVID made her curious about the practice. “I was so inspired by the story,” she recalled. “It was as if at the end of life, I saw a door to a new future.” 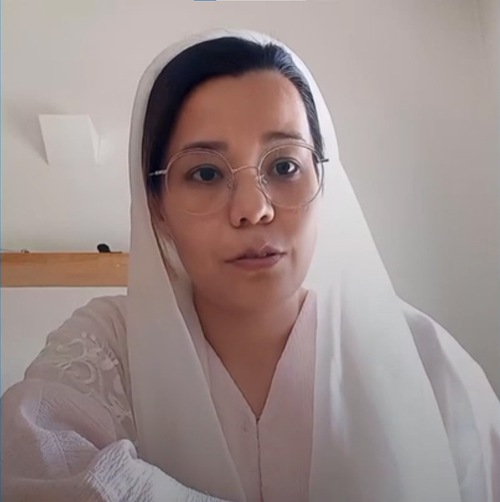 Maryam Shahi worked as a Euronews journalist based in Afghanistan.

In order to report on a protest rally and march in Kabul, Afghanistan’s capital, Maryam went to a public square to shoot video footage. “I received a phone call from a French news editor,” she recalled. “He asked me to interview an organization’s supreme council member who was participating in the rally.”

Little did she know, but the phone call saved her life. “To interview the council member I had to come out of the crowd and stand in a less noisy place,” Maryam explained. “But two minutes into the interview, an explosion and then a second explosion occurred at the exact place where I stood before.”

While hurrying to a wall for protection, machine guns began shooting at the protesters from a hidden location not far from her. “I thought the terrorists might shoot at me,” she added, “but somehow I survived the incident.”

But the tragic scene caused lasting trauma – both physically and mentally. “Two months later I began having severe shortness of breath,” she said. “Then I started to have symptoms of heart disease and serious abdominal pain which lasted for months.”

These symptoms went up and down in intensity. Doctors in Kabul said they were caused by stress and they prescribed sedatives. The medicines only relieved the pain, but did not make it go away. In 2018 she went to Iran for treatment. “A psychiatrist said I had post-traumatic stress disorder (PTSD) and I had to take antipsychotics for six months,” she said.

A Voice from the Heart

Maryam still suffered from depression, although not so bad as before. “When I read about the pollution of natural resources and how the earth’s ecological system is deteriorating, I felt the earth was dying,” she explained. “I was so worried about the future and future generations.”

Yet in her heart she always had a feeling—as if she had something important to do. “I had that thought for years—although I did not know exactly what I was supposed to do. But the major decisions of my life were made based on that voice from my heart.”

She wanted to follow the voice, but did not know exactly how. Friends around her shared their experiences. They suggested she focus on work and learn English so that she could earn more money or find a job as a government officer. “But they missed the point—that wasn’t what I wanted,” Maryam said.

As time passed she found herself drifting. She felt like she was losing control of herself. “When I felt sad, I easily lost my patience,” she said, “I became irritable and often vented my anger on the people close to me.”

One day in early 2020, Maryam had a dream. “It was as if I was sliding down on wheels. The speed increased and I lost control,” she recalled. “Then at a turning point, a force pushed me backward and I stopped. I woke up frightened—if that force had not stopped me I would have fallen over that cliff.”

She did not know what that dream meant until several months later.

Encountering Hope in the Most Difficult Days

When the first wave of COVID-19 arrived in Afghanistan in March 2020, Kabul implemented isolation measures. “I was preparing my graduation thesis for my Master’s degree, so I was under intense mental pressure,” she said.

During the following three months, every day she woke up coughing and her throat was sore. This went on every day until evening, which made her exhausted. She took medicines, including Chinese medicines, but they did not help. “My younger sister had a summer break, so she went on vacation with my parents,” Maryam said. “I was home alone–I felt lonely and depressed. Fortunately my illness was not COVID; otherwise I might have died.”

During those difficult days she often browsed social media. One day, she saw a video in Persian (Farsi) about the persecution of Falun Dafa in China, but she did not finish watching it.

Then she noticed a post about how people recovered from COVID by reciting “Falun Dafa is good” and “Truthfulness-Compassion-Forbearance is good.” “Although I did not have the virus I was curious and wondered if this could help me – I had been suffering like this for months, but none of the medicines I took made any difference.” Maryam thought, “I’ll try this because there’s nothing to lose.”

That morning she began reciting the phrases in Persian. “After a few minutes, I began sneezing and I felt that my body was not so heavy anymore,” she explained. “When I recited the phrases in the afternoon. I started sneezing again. My body became lighter and I felt very comfortable.”

To learn more about Falun Dafa, she contacted a practitioner whose information she found on a Falun Dafa website. “With his help, I downloaded Zhuan Falun and the music for the five sets of exercises,” she said.

The first evening she read Zhuan Falun was memorable and Maryam said she was too excited to sleep. “My mind was purified. The contents in the book also made me rethink the knowledge I’d learned in school, as well as religions,” she said. “In fact, I found that some principles I’d learned in life were consistent with Falun Dafa’s teachings.”

During those days under the stay-at-home policy, she spent many hours reading Zhuan Falun and doing the exercises every day. “Sometimes even when I was half-awake, I could feel that Master Li (Falun Dafa’s founder) was purifying my body and helping me to improve in cultivation,” Maryam recalled.