The Midsummer Festival is a traditional Swedish holiday that celebrates the summer solstice. Many tourists come to Sweden to enjoy the festivities. Practitioners participate every year to raise awareness about Falun Dafa and the CCP’s ongoing persecution. 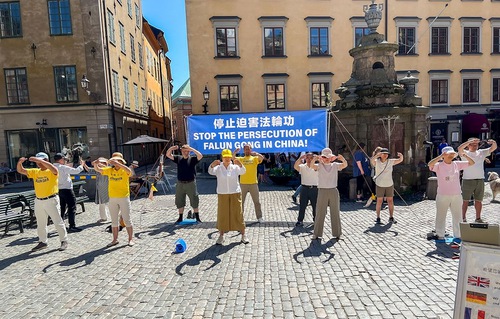 Practitioners demonstrate the Falun Dafa exercises in front of the Nobel Prize Museum. 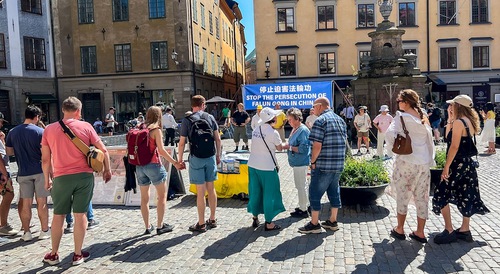 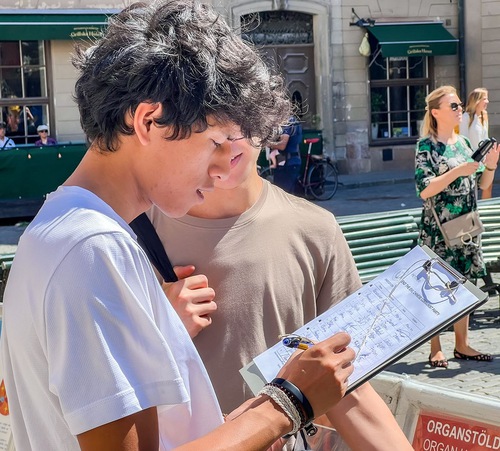 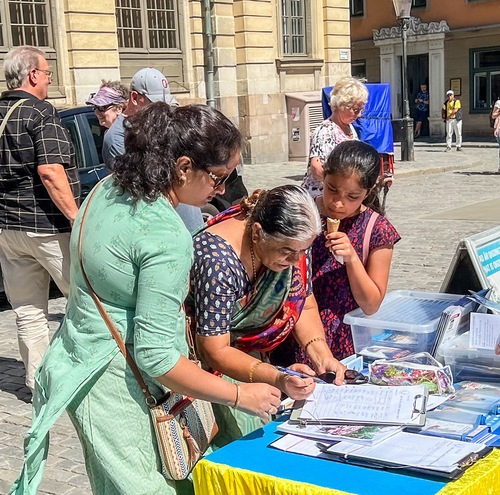 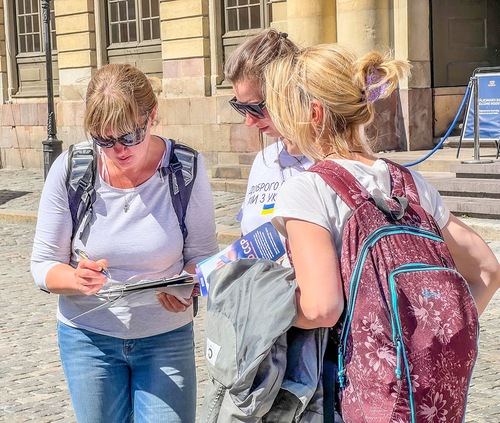 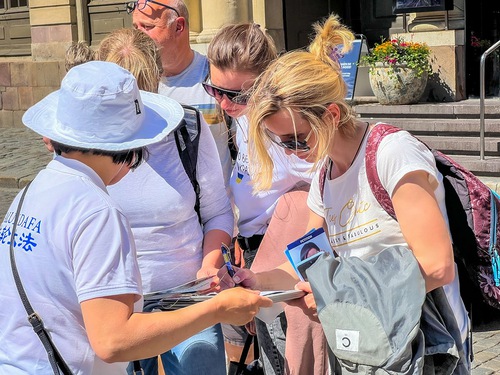 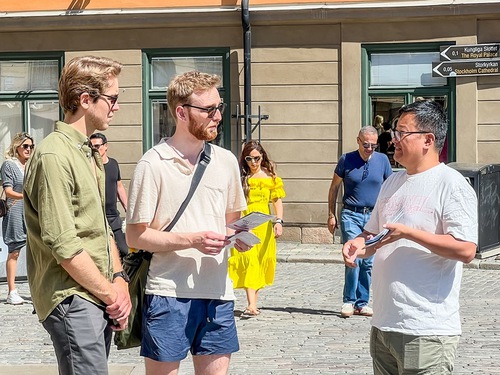 Passersby chat with practitioners to learn more about Falun Dafa. Many signed the petition after learning about the CCP’s persecution.

“The truth cannot be hidden.”

Petter, from Egypt, stopped in front of the practitioners’ information booth and asked about the CCP’s forced live organ harvesting.

He said, “I believe that forced live organ harvesting is really happening in China. I know that the CCP is capable of doing anything. You picked a good place to raise awareness. Not only are you right in the city center where all the government officials work, it is also a popular tourist spot. Many people will learn about Falun Dafa.”

He said that he is well aware of events happening in China. “China does not have media freedom. Those who are wanted by the communist regime can disappear at any moment. The CCP is hiding the truth. However, it is only a matter of time before the truth is revealed. Heaven is watching and the universe’s truth can never be hidden.”

Before leaving Petter smiled and said, “I feel there is a special reason I came across you [Falun Dafa practitioners] today. You have given me an opportunity to understand the truth. You’re doing a great thing! I will definitely sign the petition.”

An elderly couple from Singapore stood near the Falun Dafa booth for a long time. The man told a practitioner that he disliked the CCP. He said that because of this, he cannot return to China and has been living in Sweden for over 40 years. The couple signed the petition without hesitation and expressed their support for Falun Dafa practitioners.

The man said, “The CCP is evil and I know this very well. I commend your bravery in standing up to expose CCP’s acts against humanity!”

Upon learning more about Falun Dafa, the man said he wanted to purchase all the informational materials. However, a practitioner told him that the materials were all free of charge.

He was extremely touched and said, “These materials are valuable historical pieces. I will treasure them.”

Streams of people passed by while practitioners demonstrated the exercises. Many people were shocked when they learned about the CCP’s atrocities. Several people chatted with practitioners to learn more about Falun Dafa and signed the petition to help end the persecution.

Not only did a young Indian man sign the petition, he also beckoned his two friends to come and sign it. He and his friends chatted with practitioners for a long time. They said they knew the CCP was wicked especially because of it’s Internet censorship and propaganda that it spreads to deceive millions of Chinese people.

The three young men said they admired practitioners’ courage in exposing the CCP’s crimes. They expressed their full support for practitioners and said, “We hope our signatures will help, we will help you in any way we can!”

Before leaving, the young men gave practitioners’ high-fives to show their support.

Fortunate to Learn about Falun Dafa

A Japanese man was attracted to the peaceful scene as practitioners did the exercises. He started chatting with them in English after learning about Falun Dafa and said that he has been living in Sweden for 15 years.

“Why is such a peaceful and beautiful practice persecuted by the CCP? I am shocked to learn about the forced live organ harvesting. Meditation practice is part of traditional Asian cultures and is beneficial to one’s health and mind. I find it unbelievable that something like this is happening in China.”

He said, “Oh, I understand now. This is Dafa, the universe’s way.”

He happily said, “Thank you very much. I am very interested in learning Falun Dafa.”

Background: What Is Falun Dafa and Why Is the CCP Persecuting It?Falun Dafa (also known as Falun Gong) was first introduced to the public by Mr. Li Hongzhi in Changchun, China, in 1992. The spiritual discipline is now practiced in over 100 countries and regions worldwide. Millions of people who have embraced the teachings—which are based on the principles of Truthfulness, Compassion, and Forbearance—and learned the five exercises have experienced improved health and well-being.

“Two Sisters Tried and One of Their Husbands Faces Trial, All for Their Faith in Falun Gong”