Home > Cultivation > Clarifying the Truth
Ukraine: Stepping Out to Tell People about Falun Dafa During the War
June 27, 2022 | By a Falun Dafa practitioner in Ukraine

(Minghui.org) I am a Falun Dafa practitioner and I live in Kharkiv, Ukraine. I was awakened by the sound of exploding shells in the early morning hours of February 24, 2022. I thought the war must have started. In my half-sleep state I resented being woken up. I did not realize how severe the situation was but I later did.

Kharkiv has been attacked by all kinds of weapons since the first day of the war. Basic facilities in our district were constantly bombed, leading to power outages. Without electricity, refrigerators and electric stoves stopped running and people could not cook. We were out of electricity for approximately two weeks, but I was not upset. When the windows were shattered I covered them with tarpaulins. I am not upset and will fix them in the future. Our community had no electricity. This meant that we could not use the Internet or our mobile phones. When communications were restored, I learned that most Falun Dafa practitioners in the city had left. This made me sadder than anything else that happened and I wept.

Before the war, practitioners did the exercises in our neighborhood every day. Some practitioners did the exercises while others handed out information, even in the bitter winter. We also collected signatures on petitions to stop the persecution in China or to end the Chinese Communist Party (CCP). Looking back, I realized that compared to the current situation in Ukraine, our lives were very comfortable back then. The environment is now extremely difficult and very few practitioners remain.

“... no amount of upheaval in this world should be able to alter your mission as a Dafa disciple.” (“To the 2021 Dafa Conference in Taiwan”)

I never thought of leaving this place. How do I do the three things required of Dafa disciples during the war? I was perplexed.

Kharkiv seemed to come to a complete stop after the war broke out. Traffic was stopped, the subway was used as a shelter and all shops closed except for certain ones selling food and medicine. I was shocked that people were killed while waiting in line for humanitarian aid. Many people died during the bombings, including children. These things are terrifying, but you have to face them.

I have some newspapers that introduce people to Dafa. I went to the streets to tell people about Falun Dafa and they accepted them. Two weeks later I learned that two Vietnamese practitioners were still in the city, and they had truth clarification materials. This news encouraged me.

The city was bombed for over two months without any respite. The shells hit apartments and cars, and exploded in the streets. Residents hid in shelters and only came out to search for food. We did not know how long we would survive. We walked along a slippery path four to five hours every day in below freezing temperatures. We queued up at shops to get supplies. I tried my best to let more people know about Dafa during this time. I was not terribly frightened. I believed that if I did the right thing, Master and gods would protect me.

I knew from the Fa teachings that wars are states of affairs brought about by larger, cosmic events. Many Ukrainians have hatred in their hearts, but I kindly remind them that they should get rid of such hatred as it will destroy us. We should pay attention to our actions, thoughts and reflect if we have done everything right.

The other practitioners and I decided to do the exercises outdoors. That way we can meet and talk to more people because they only leave their homes to buy things. We do the exercises at a shopping mall and near shops selling food. We go out every day to distribute truth clarification newspapers. At times, we hear shells flying above our heads and can see as they hit. 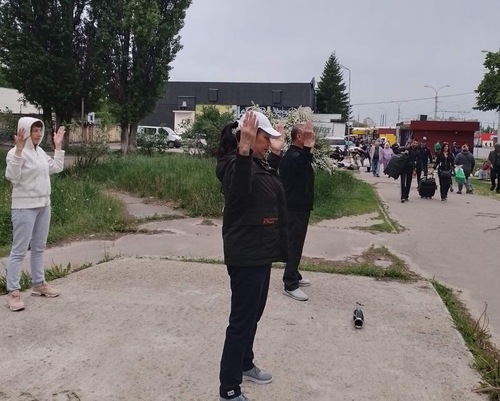 Falun Dafa practitioners in Kharkiv do the exercises outside despite the bombing.

Now, when I tell people about Falun Dafa, I usually tell them that practicing will make them healthy, calm and most important of all become kind and good people.