(Minghui.org) Today's news from China includes incidents of persecution that took place in 11 cities or counties in 6 provinces, where at least 16 practitioners were recently persecuted for their belief. 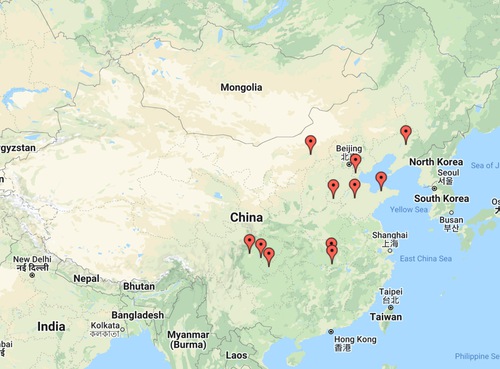 Ms. Guo Shouzhang from Dongqucheng Village, Canzhuang Town, was harassed by the head of the village committee and the local police on numerous occasions since 2019. As a result she became bed-ridden, paralyzed, and not able to take care of herself. She passed away on May 28, 2022.

Ms. Huang Hongwei and Ms. Luo Yuanying from the Qiaokou District were scheduled to be tried on May 31, 2022.

Ms. Shen Liyan was arrested on May 27, 2022. The police ransacked her home that night. Her son was the only one there.

Ms. Cheng Zhaoxia, in her 50s, was tried in the Changqing District Court at 9 a.m. on January 5, 2022. The trial ended after 11 a.m. Ms. Cheng defended herself, but presiding judge Wang Fang did not allow her to plead not guilty. Ms. Cheng was not allowed to say that Falun Gong is good. In the end, prosecutor Cheng Li argued that Ms. Cheng refused to plead guilty, had a bad attitude, and suggested that she be sentenced to more than three years in prison.

Ms. Cheng was still at home a few days after the trial, and that was the last time her family and friends had contact with her. Her whereabouts have remained unknown for over four months.

On May 27, 2022, officers from Heping District Domestic Security Division and the Maluwan Police Station decided to take action against 85-year-old Ms. Liang Shuzhi on June 6. They had already turned over Ms. Liang’s case to the Liaozhong Procuratorate.

Three officers from the Fangjiazhuang Police Station in Jiayu County broke into elderly Ms. Zhang’s home a few days ago. They confiscated a photo of the founder of Falun Gong and Falun Gong books. Details of her current situation are not clear.

On May 26, 2022, officials from the Xinjie Town government in Jiayu County knocked on Ms. Chen Jinxiu’s door. She was not at home. These people then went to the home of her sister Ms. Chen Fengyu to ask for her whereabouts. Ms. Chen Fengyu reprimanded them before they gave up and left.

Officers from the Sanfeng Police Station and Heye Police Station in Pengxi County went to Mr. Gou Yuejun’s home to harass him on May 8, 2021. Mr. Gou ignored them, and they left disappointed.

On April 12, 2022, director Chen of the Sanfeng Police Station and others went to Mr. Gou’s home to harass him again, and attempted to force him to give up practicing Falun Gong.

On May 16, director Zhao of the Heye Police Station led others to harass Mr. Gou again. They pressured him to sign three statements renouncing Falun Gong.

The secretary of the Xipeng Town Political and Legal Affairs Committee in Jiulongpo District, the police station director, the Comprehensive Management Office director, and about six or seven sub-district administration office staff members went to knock on Mr. Ren Dongchuan’s door at 9 a.m. on April 13, 2022. Mr. Ren did not open the door, so they called in a locksmith, who failed to unlock the door as it was bolted from inside. Mr. Ren agreed to go to the community office for a talk before they left.

When Mr. Ren went out on the morning of May 10, he received a phone call from the residential police officer, who wanted to have a talk with him.

When he went home that afternoon he was stopped by a plainclothes officer at his door. The director and a group of officers arrived. They opened the door with Mr. Ren’s key, checked the room, and confiscated a desktop computer, a cell phone, and some transcribed cards. They took Mr. Ren to the police station and kept him handcuffed to an iron chair in the interrogation room. At about 4 or 5 p.m. the following day officers from the local police department showed up. They returned his cell phone and let him go home. They said they would examine the computer before returning it.

Family and friends of Mr. Zhao Wei and his wife Ms. Ma Hongyang were not able to contact them on the night of May 27, 2022, when they were in Hohhot City. Since then phone calls to Mr. Zhao went unanswered. Their family is worried that the couple were arrested.

Yang Jianbo, director of Dongta Community Management Office in Mengyang Town, and two other people went to Ms. Zeng Qingfang’s home after 9 a.m. on May 24, 2022. They wanted to confirm her husband’s phone number. Ms. Zeng was not at home at the time.

After 12 p.m. on May 27, 2022, Zhang Chongyu, director of the Qingjiang Community Management Office in Mengyang Town, and others went to Ms. Lin Shufen’s home. They told her not to go out, not to meet with others, and not to distribute truth clarification leaflets.

After 11 a.m. on September 11, 2021, seven or eight people including Mengyang Town government officials and Yongqiao Village Party secretary Liu Bin, accompanied by Ms. Xie Changxiu’s husband Zhang Baijin, their daughter, and their son Zhang Chi, coaxed Ms. Xie into going to the Pengzhou Care Center for transformation, where they pressured her to fingerprint paperwork.

“Podcast (Cultivation): “Saving People While Seeking to Get My Suspended Pension Benefits Reinstated””